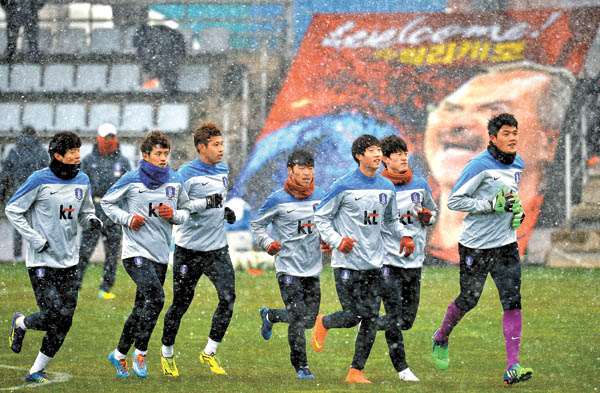 From left: Hwang Ui-jo, Hong Chul, Kim Min-hyeok, Kim Sung-joon, Lee Yong-jae, Lee Jae-sung and Jung Sung-ryong run in the snow during training on Tuesday at a football field in Seogwipo, Jeju. The training session is more competitive than ever as Manager Uli Stielike said he will choose players for the Asian Cup in January regardless of their age or experience. [NEWSIS]

The national football team traveled to Jeju Island on Monday for a weeklong training session ahead of the Asian Cup in January, but the weather there hasn’t been very welcoming. Temperatures dropped close to zero in recent days and strong winds and sleet are making training difficult.

But the footballers are dealing with their surroundings. If anything, the national team is having its most rigorous training session ever. Assistant Coach Park Kun-ha said he was even “afraid they might get injured because they are working out too hard.”

The intense training was mostly the idea of Manager Uli Stielike. Of the 28 players at training, 14 are practicing with the national team for the first time. Newcomers rarely make it on the final roster for a major international event, but Stielike wanted to give the chance to a variety of players.

“The national team is open to anyone, and those who have passion will be selected [for the Asian Cup] regardless of their age and experience,” the manager said at a press conference last week.

Stielike said he would announce the 23-man roster for the Asian Cup a day after training ends in Jeju, which means that the players’ performance during the session will be reflected on the list.

The team training just began, but the players looked more serious than ever. They did not hesitate to challenge other players for the ball in an attempt to stand out to the manager.

Proving that enthusiasm goes a long way. In a scrimmage on the first day of training, the three players who scored - Kang Soo-il, Jeong Dong-ho and Kim Eun-sun - were all first-time national team members.

On Tuesday, Lee Jong-ho, who was also playing with the team for the first time, netted the ball passed from another newcomer, Rim Chang-woo, with a bicycle kick.

The players trained for three and a half hours on Tuesday, including conditioning, tactics and a scrimmage. It hailed as they practiced, but the footballers hardly seemed to notice.

The oldest player, Cha Du-ri, 34, said Tuesday that every day he spends with the national team is meaningful and that he will “fairly compete with the other members” for his spot on the roster.

It has only been two weeks since the regular season ended, but some eager footballers used that time to prepare for the Jeju session.

Kang Soo-il, the second mixed-race Korean to play for the national team, also built up his body in that period. Kang’s strength and skills caught Stielike’s eye during scrimmages this week.

Kang, who also joined the national team for the first time, said he was determined to make sure his name is on the roster for the Asian Cup and has even changed the main photo on his social network account to a picture of the national flag.

“Desperation and hunger is all I have,” Kang said. “I wore the national team uniform for the first time and it just looks good on me. I’ll do my best so that I won’t have to take it off.”

Kang’s position is striker, a position for which there is stiff competition ahead of the Asian Cup. All five strikers at training are new to the team - Kang, Lee Jong-ho, Lee Yong-jae, Lee Jung-hyeob and Hwang Ui-jo. The Asian Cup is the perfect opportunity for them to play in an international event because Lee Dong-gook and Kim Shin-wook, who would normally be Stielike’s first picks, are both out with injuries and Park Chu-young isn’t performing well at his new club Al Shabab in Saudi Arabia.

Lee Jong-ho, who joined the team as a replacement for Kim Seung-dae, also said he doesn’t want to miss this opportunity.

“I will take this chance and make it an opportunity to improve myself,” Lee said.