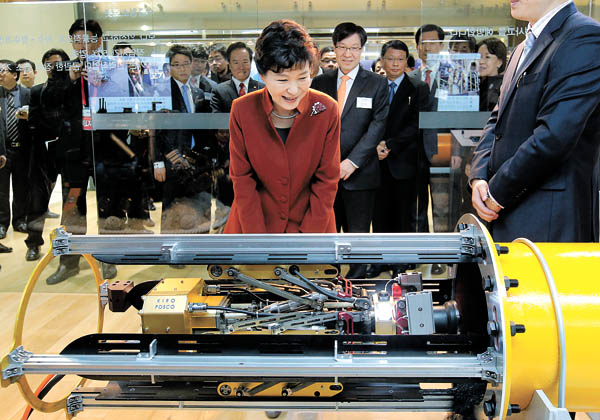 The Park Geun-hye government’s creative economy initiative received its biggest boost thus far on Wednesday with the opening of innovation centers in Gumi and Pohang in North Gyeongsang.

That brings the number of innovation centers nationwide to five, designed to assist start-ups and support regional economies.

The Pohang center in particular received a lot of attention for being independently established by Korea’s largest steelmaker, Posco. It is the first innovation center established and run by the private sector.

Samsung Group, which established an innovation center in Daegu in September, opened another one in Gumi to help nearby electronics manufacturers and suppliers enhance production efficiency by implementing smart systems in their factories.

Park and Deputy Prime Minister for the Economy Choi Kyung-hwan attended the opening ceremonies for both centers on Wednesday.

“Regional economies have prospered mainly around industrial complexes for the past 40 years, but those areas nowadays have struggled with deteriorating production facilities and low technological competitiveness,” Park said at the ceremony. “The two new innovation centers will certainly revitalize these places by helping traditional manufacturers roll out new products inspired by technologies like the Internet of Things, big data and 3-D printing.”

The 2,000-square-meter (21,527-square-foot) Pohang center is located on the campus of Pohang University of Science and Technology (Postech) and will house 10 early-stage start-ups. The center will help regional businesses in ways similar to government-led centers in Daegu, Daejeon and Jeonju, North Jeolla.

Posco Energy will work with small battery makers to develop and commercialize new technologies. The steelmaker will also work on growth engine businesses involving lithium and nickel in cooperation with local start-ups and small enterprises.

Another goal for Posco is to involve local start-ups and small businesses in transforming the Pohang steel complex into an environmentally friendly industrial area by implementing technologies like an electricity demand management system. Joint research will begin to develop technologies that recycle carbon dioxide emitted from the complex and help restore the marine ecosystem in the sea around Pohang.

Posco has worked with 1,300 small enterprises nationwide since 2004.

Meanwhile, Samsung Group decided to invest 30 billion won ($27.3 million) in the North Gyeongsang innovation center in Gumi to use technology to revitalize the region’s traditional manufacturing and agricultural industries.

Gumi has long been the home for factories of Samsung Electronics and LG Electronics, as well as their parts and materials suppliers.