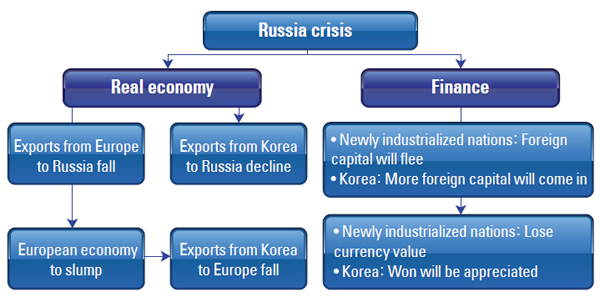 The collapsing Russian ruble is not good news for the Korean economy and some major industries could be affected, including automobiles and electronics.

According to a report by the Hyundai Research Institute on Wednesday, the impact of Russia’s financial crisis might not be felt immediately, even though Russia is the country’s 10th-largest export market.

In the first 10 months of this year, Korea imported $13.4 billion worth of Russian products but only exported $9 billion, only 2 percent of the country’s overall exports, the institute said.

But the situation will get much worse if the current financial crisis in Russia spreads to 12 newly industrialized nations such as Brazil, which has seen its currency hit its lowest level in five years.

The common ground for Russia and 12 newly industrialized nations including Indonesia, Brazil, Ukraine and Turkey, according to the report, is that they heavily rely on exporting raw materials. Korean financial institutions have an exposure of $11.3 billion to those 12 nations’ loans and securities.

The institute said that Korea’s overall exports could decline by 2.9 percent and its economic growth rate would fall 0.6 percent if Russia declares a debt moratorium or Korean banks can’t otherwise be repaid.

“The possibility is high [for Russia to declare a moratorium],” said Lee Jun-hyup, a researcher at the Hyundai Research Institute. “The decision will be made as early as January.”

If European nations are affected by the Russian crisis, it could trickle down to affect Korean exports to Europe.

“Since the Russian crisis is predicted to impact European nations such as France, Germany and Italy - as Russia is a big export market for them - it would eventually impact Korea’s exports to Europe,” said Lee.

The Korean industry that could be directly impacted by the Russian crisis is cars.

According to the Korea Trade-Investment Promotion Agency (Kotra), more than 40 percent of Korea’s exports to Russia are in the car and auto parts businesses. The number of cars Korean automakers sold in Russia from January to November was 2.22 million units, down by 11.6 percent from a year earlier.

Total sales for the nation’s leading automaker Hyundai Motor dropped by 4 percent during the same period.

“Our vehicles sold in Russia are mostly manufactured in Saint Petersburg,” said a Hyundai spokesman. “If the value of the ruble keeps falling, the profitability will get worse because the currency translation profit from the ruble to the won would fall.”

The situation is potentially worse for the nation’s smallest automaker Ssangyong Motor because about 30 percent of its global exports are to Russia. The company’s exports to the country in the first 11 months of the year declined by 20 percent.

“Due to the falling ruble and the military conflict with Ukraine, the situation is getting worse,” a spokesman from Ssangyong said. “We are trying to expand our export channels into China and Europe, but it isn’t that easy.”

If the worth of the ruble keeps falling, the purchasing power of Russians will fall, which will eventually lower the demand for electronics appliances including TVs and smartphones.

“Because the Russian central bank increased the interest rate by 6.5 percent overnight, we expect our sales in Russia to decline because their spending is expected to shrink,” a Samsung Electronics spokesman said.

The horizon is equally bleak for shipbuilding and heavy industry companies that have been trying to expand business with Russian oil companies. In the past few years, Korean companies have been expanding their investments, building joint factories and shipyards.

“Russian oil companies are hesitant to give orders lately due to the crisis,” said a shipbuilding industry spokesman.

The Russian central bank increased the base interest rate from 10.5 percent to 17 percent on Monday local time, but failed to stop the crash of the ruble. On Monday local time, the exchange rate of the ruble to the dollar fell one point to 80 rubles to a dollar, but bounced back to 69 rubles after the country announced it will apply some additional measures to stabilize the foreign exchange market.

The ruble has lost more than 50 percent of its value this year. It traded at 70.7 per dollar Wednesday morning, or 4 percent lower than the closing on Tuesday.

As the ruble went into free fall, the Bank of Korea said it held an emergency meeting that started at 10:30 a.m. on Wednesday and said it would closely monitor the situation.