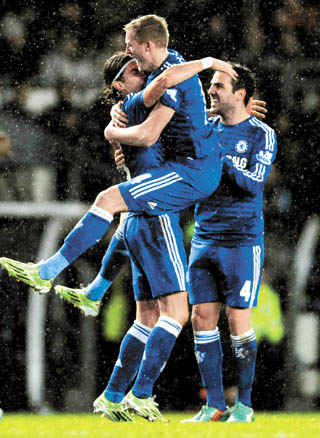 Chelsea swept into the semifinals of the English League Cup on Tuesday to join third-tier Sheffield United, which shocked Premier League side Southampton.

Eliminated at the quarterfinal stage in three of the past four seasons, Chelsea made no mistake this time as goals by Eden Hazard, Filipe Luis and Andre Schurrle secured a 3-1 win at second-tier Derby.

Derby, managed by former England Coach Steve McClaren, was reduced to 10 men in the 78th minute just as it was threatening a comeback at 2-1. Yet Chelsea mostly coasted through the game at Pride Park, with the Premier League leaders’ victory marred by injuries to center back Kurt Zouma and striker Didier Drogba.

“We played in a very professional way and controlled the game for most of the time,’’ said Chelsea Manager Jose Mourinho, who fielded a strong lineup as he chases the first trophy of his second stint at the London club.

Southampton’s meltdown after a brilliant start to the Premier League season continued with a 1-0 loss at United, which emulated its achievement of last season when the team reached the semifinals of the FA Cup.

Second in the Premier League only three weeks ago, Southampton has lost five straight matches - four in the league and Tuesday’s deserved defeat at Bramall Lane.

Marc McNulty scored a 63rd-minute winner for United, while defender Florin Gardos was shown a straight red card for Southampton in the 90th.

The League Cup is low on Chelsea’s list of priorities this season, with the team atop the Premier League and one of the favorites for the Champions League as the competition enters the last 16.

Mourinho is treating it seriously, though, and one of his star players put Chelsea ahead in the 23rd when Hazard forced a defensive error before collecting a short pass from Cesc Fabregas, cutting inside and shooting low inside the near post for his ninth goal of season.

Zouma was carried off on a stretcher after a seven-minute delay toward the end of the first half, after being taken out by Petr Cech as the Chelsea goalkeeper punched away a cross.

Luis doubled Chelsea’s lead in the 56th with a curling free kick from 25 meters (82 feet) - the left back’s first goal since joining from Atletico Madrid.

Craig Bryson reduced Derby’s deficit before the hosts had Jake Buxton sent off for impeding Loic Remy, who came on as a replacement for Drogba, as the striker attempted to latch onto a through-ball. Schurrle tapped in a rebound to seal the win in the 83rd.

Asked if Chelsea was capable of winning four trophies this season, Fabregas said: “We definitely have the talent, the discipline and the courage to do it from what I’ve seen so far from my short time here.’’