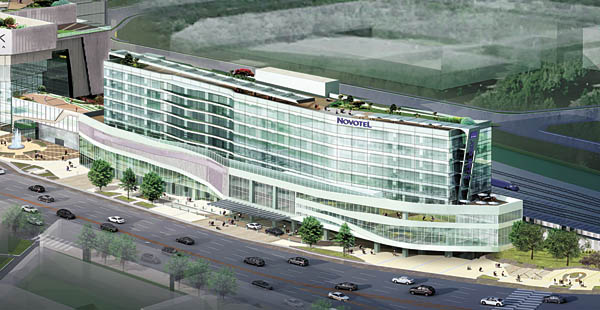 A digital rendering of the Novotel Ambassador hotel, which opens Thursday. Provided by the company

Aekyung Group will open its first hotel, Novotel Ambassador, in Suwon, Gyeonggi, on Thursday next to its department store AK Plaza.

The new hotel will be connected to AK Plaza by Suwon Station, a major commercial area with the second-most visitors per day of any station, after Seoul Station.

The Novotel Ambassador is 35,000 square meters (8.6 acres) and has 287 rooms. It also has a bar, fitness centers, restaurants and conference rooms across nine floors and three basement floors.

The hotel’s Grand Ballroom is 700 square meters, making it the largest conference hall in Suwon.

Aekyung said that the establishment, which is the first five-star hotel in Suwon, will be managed by Accor-Ambassador Korea, a French-Korean hotel management joint venture.

With AK Plaza, Aekyung has had a strong foothold in the city for 10 years, and the surge in commuters through the district has led other retailers, such as Lotte Group, to open malls there.

AK Group’s entry into the hospitality business is part of the company’s expansion strategy.

After starting off in the 1950s as a company that made soup, Aekyung is now active in many areas.

Aekyung has diversified from consumer products into basic chemicals and then to retail, opening several department stores by the 1990s.

The group is now divided into three main divisions - consumer products and airlines, chemicals, and retail and real estate development.