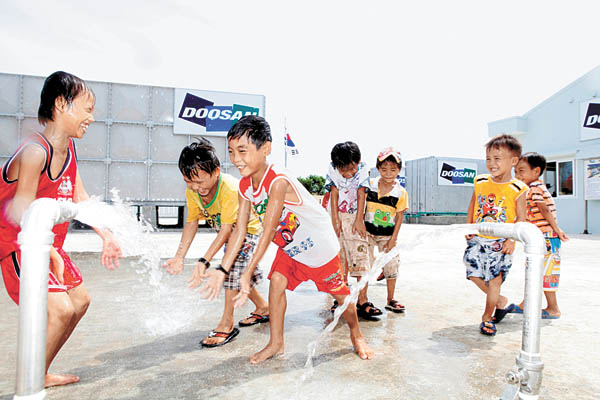 Children on An Binh Island in Vietnam play with fresh water produced from the desalination facility build by Doosan Group. Provided by the company

Doosan Group, the nation’s 12th-largest conglomerate, is especially interested in building a foundation for sustainable growth for disadvantaged members of society. One of the methods the corporation is focused on is education.

Under the name Doosan Community Blueprint, each of Doosan’s affiliates strives to make long-term contributions to those in need, especially children and students. Employees voluntarily share a portion of their wages and companies prepare various education and mentoring programs for the betterment of children.

It was the belief of the corporation’s late founder, Park “Yonkang” Too-pyung, that education is the driving force of the nation. The Doosan Yonkang Foundation was established in 1978 to finance and host various education-related activities, such as scholarships for talented students, financial aid for researches, overseas education for teachers and book donations. In 2007, the group also opened the Doosan Art Center to support young artists. In the next year, it began supporting Chung-Ang University.

Doosan Heavy Industries and Construction, in association with Changwon City authorities, provided a scholarship to the city’s young artists in Changwon Science High School and specialized schools in the area. Also, local children from low-income families receive funding for their education.

The group’s charity activities also offer a hand to those abroad. Doosan Heavy serves the poor in its business partner countries of Vietnam, India and Cambodia. One example is the desalination facility the company built for the residents of An Binh Island in Vietnam. Doosan Infracore, the machinery maker, has been building schools in China’s rural areas since 2001. The company brings in local commercial agents to financially take care of the schools.

Bobcat, a farm and construction equipment manufacturer in the United States, used its machines to repair roads and school playgrounds.

“We all have different jobs, but we all work with one heart for those who need our help,” said Park Yong-maan, the chairman of Doosan Group.