[Sponsored Report] Using its fund, KT&G helps those in need

[Sponsored Report] Using its fund, KT&G helps those in need 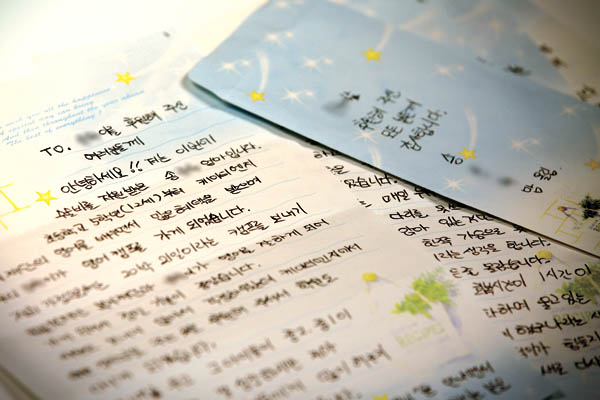 A letter from a mother of a beneficiary who received financial aid from KT&G. Provided by the company

Ki-wun, a boy in an orphanage on Jeju Island, suddenly collapsed while playing his favorite sport - football. Doctors did everything they could to regain his consciousness, but Ki-wun remained in a coma. Ki-wun suffers from Brugada syndrome, a genetic disease common in males aged between 20 and 40. The disease threatens the life of patients with sudden cardiac death without any recognizable symptoms.

Although Ki-wun’s health was poor, the orphanage and his friends did not lose hope. They started to raise money for his treatment, knowing the miraculous case of Jeju United Striker Shin Young-rok, who succumbed to the same disease but recovered after 50 days in a coma.

Kim Jae-bong, a manager of KT&G’s Jeju branch, heard the news and decided to ask for donations from his colleagues by using the new fund-raising system the company established last year. The company’s employees write about a person who needs help on the bulletin board of the company’s intranet and the company then donates to those that receive more than 200 replies.

The donation comes from the Sangsang Fund, in which the company doubles the amount of money its employees contribute. Also, the company adds 10,000 won to the fund for each hour its employees serve in volunteer activities. From March 2013, the company selected 17 beneficiaries and gave a total of 100 million won to help them. One of the recipients was Kim, an 11-year-old boy who cannot attend school because of a brain tumor, and another one was Ahn, a teacher’s college student who had to support his younger siblings after his father’s company went bankrupt.

The company’s fund-raising system is unique in that it not only encourages employees to contribute out of goodwill but also lets them select the recipients. The system induces active participation of its workers in actually looking after their neighbors.

Besides the fund-raising system, the company has the KT&G Social Welfare Foundation and the KT&G Scholarship Foundation to aid disadvantaged members of society. Each year the tobacco maker spends about 50 billion won in helping the needy.

“We will reach out our hands to give hope to those who await someone’s help,” said Ji Hyo-seok, who is in charge of KT&G’s social contribution activities.