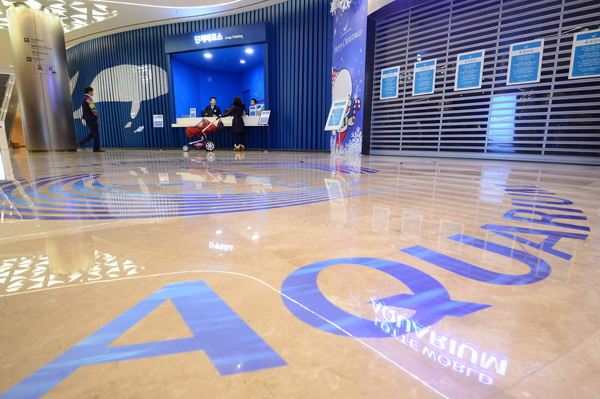 Notices on its temporary closure are taped on the main entrance to the aquarium on Wednesday at Lotte World Mall in Songpa District, southeastern Seoul. [NEWSIS]

The aquarium and multiplex movie theaters at Lotte World Mall were shut down and construction was halted on the complex’s concert hall Wednesday on orders by the Seoul Metropolitan Government.

The action came a day after a construction worker died in the concert hall, apparently from a fall.

The city has come under fire for granting Lotte World Mall an early opening in October.

Lotte affiliates involved to the complex issued an apology for raising safety concerns on Wednesday, sayinf they would comply with the municipal government’s order to close down the aquarium and theaters. Both facilities were closed in the day.

This has been a particularly bad month for Lotte, which has been embroiled in controversy since the beginning of construction on the complex.

Two more cracks were discovered in a subsequent inspection.

Just three days later, some panicked patrons fled its theater in the middle of a movie after severe vibrations.

The Ministry of Public Safety and Security initially concluded that the cracks were caused because the adhesive sealant failed to properly bond between the aquarium and concrete wall, while the vibrations, it said, came from the chairs in a nearby 4-D theater.

The municipal government gave permission to Lotte World Mall to open early in October on the condition that it would halt operations at the complex in the event a defect was found that could compromise the safety of the building.

However, an official from the city government said that at the present time, it was “not considering revoking the approval for the early opening.”

Before granting the permission, the local government conducted safety checks with teams of experts and provisionally opened the complex before businesses began operations to provide members of the public an opportunity to check out the complex for themselves.

At that time, the municipal government said it had “conducted two safety inspections with a citizen advisory group of experts” and determined there were no problems, but the experts apparently failed to detect the recent problems regarding the aquarium and theaters.

“Lotte World Aquarium, is built on an electrical substation, which is unusual, but it did not undergo an examination in the initial stages,” said Kim Chan-oh, a professor at Seoul National University of Science and Technology, who led the ministry’s most recent inspection team.

The safety problems have prompted civic groups opposed to the early opening to criticize the Seoul government.

“The media pointed out that the inspections by experts weren’t accurate enough, but the Seoul city government recklessly gave its permission,” an activist from the People’s Solidarity for Participatory Democracy said on Wednesday.