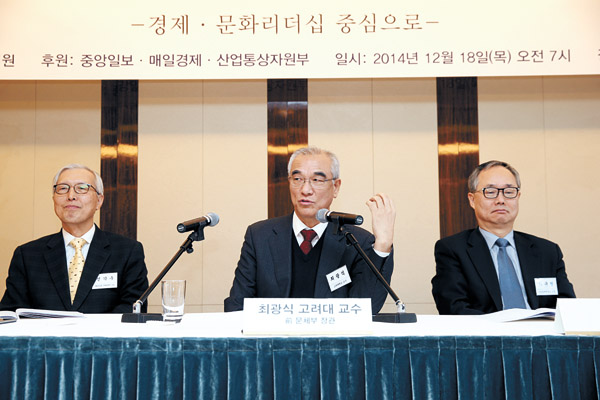 From left: Former ambassador to Japan and chair of the Korea National Diplomatic Academy’s Center for International Law, Shin Kak-soo; former minister of culture, sports and tourism and professor at Korea University, Choe Kwang-shik; and former ambassador to China and adviser to the Samsung Economic Research Institute, Lee Kyu-hyung, speak at the leaders forum. Provided by the organizer

Korea’s economic relationships with China and Japan have greatly diverged in recent years, former ambassadors to the two countries said at the 96th Korea Leaders Forum, and the nation’s ties with Japan and China are growing apart.

The relationship between Korea and China has progressed since the two countries formed diplomatic ties in 1992, said Lee Kyu-hyung, who served as the ambassador to China from 2011 to 2013.

“Trade between the countries surpassed $220 billion last year and is forecast to pass $300 billion in 2015,” Lee said at the forum, which was hosted by the National Academy of Engineering of Korea on Thursday.

He added that it was significant growth over the $6.3 billion worth of goods traded in 1992. “The number of Chinese visitors to Korea passed four million for the first time last year … and grew 39 percent to 5.25 million as of October,” Lee said.

The free trade agreement reached recently between the two countries is a very important breakthrough in the 22 years of diplomatic ties, the China expert said.

“While some experts say there are many areas that Korea should be concerned about … others say it will create a favorable environment for Korea, looking 10 or 20 years ahead, from [China’s] market of 1.35 billion,” Lee said.

Regardless, “the FTA will become an important base that opens up a new kind of cooperation between Korea and China,” he added.

Unlike the positive relationship Korea has with China, Korea-Japan ties aren’t as bright. In fact, “this may be the worst time in the [49 years] of diplomatic ties,” said Shin Kak-soo, an ambassador to Japan who served until May 2013.

The stark differences in the number of summit meetings and foreign visitors to Korea indicate the strength of Korea’s relationship with each of its neighbors, said Choe Kwang-shik, a former minister of culture, sports and tourism who moderated the forum.

Shin said the deteriorating relationship between Korea and Japan is hurting the national interest of both countries. “In our perspective, it’s significant to note the declining investment in Korea by Japan,” Shin said. “It declined 40 percent recently, and continues to decline.”