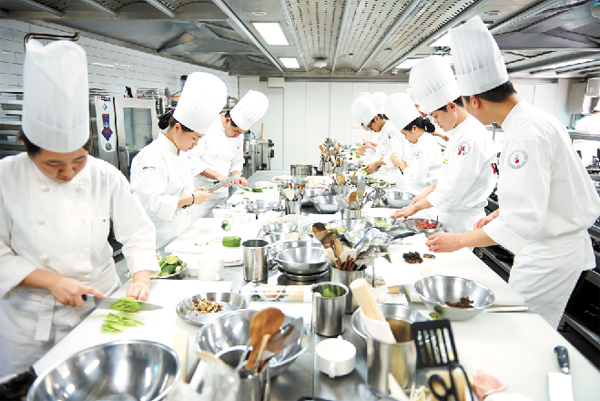 Through the New School, a culinary education institute operated by SK Group, 476 youths have received vocational training and found jobs in the food industry over the past seven years. Provided by SK Group

Lee Jong-hyun chose his career path far earlier than his friends. Growing up, the 24-year-old always loved the smell of well-cooked vegetables and liked to present steaming dishes neatly on white plates.

Eventually, the Daegu native decided to bolster his resume by advancing to a vocational high school and majoring in cooking. He then studied the food service industry at college in his hometown.

But Lee recently made up his mind not to return to education after nearly a yearlong stint at Restaurant O-neul.

“I always wanted to have a clear picture of the job, but it was hard to get a good grasp of it with textbooks back in college and high school. Much of the curriculum was focused on how to get cooking licenses,” he said.

“But the years I spent at the New School and O-neul gave me a better picture. I could learn from chefs who cook at their own restaurants. They were different from the college professors, who don’t work in the field anymore.”

In order to enroll at the New School, which is operated by SK Group’s The Happiness Foundation as part of its corporate cultural program, Lee took time off from higher education. 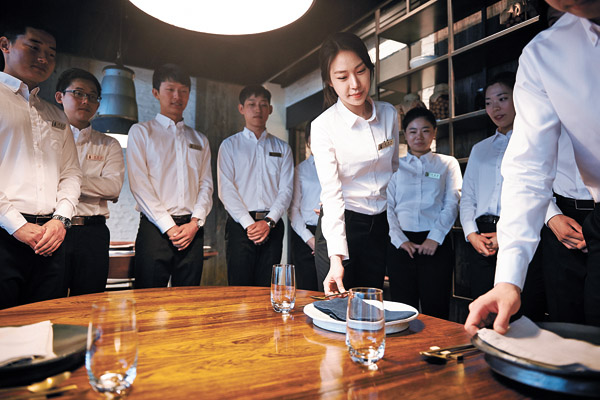 The New School added a food and beverage service department this year. Students receive practical training at Restaurant O-neul, which is linked to the New School.

After completing 12 months at the school, he landed a job in the steamed dish section at Restaurant O-neul, which is also run by The Happiness Foundation.

The vocational educational institute is free of charge to people aged between 19 and 29 who want to work in the food industry.

But there are strings attached. Only people from households with lower-than-average incomes are eligible to apply for the school.

For example, if an applicant lives with three relatives, the average monthly income of the family of four should not exceed 4.8 million won ($4,363).

Initially launched as Happy Cooking School in 2008, the program offers a culinary education to people who show promise but cannot afford to further their learning. 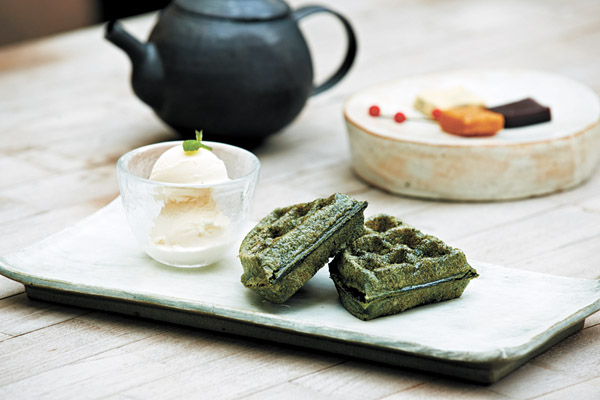 Waffles made with mugwort rice cakes are as popular as Restaurant O-neul’s main dishes. The recipe for the dessert was donated to Happy New Life, a social enterprise run by SK Group that helps former prisoners.

This year, the school renamed itself and added a food and beverage service department.

Over 12 months, students learn the basics of working in the food and service industry, along with baking skills and French, Italian and Korean cooking techniques.

Those who apply for the food and beverage service department take mandatory classes such as how to make drip coffee and pair wine with certain foods.

But all the students also take basic classes in subjects such as humanities and art.

“I liked the fact that I could balance cooking and cultural studies by taking basic classes,” said Lee.

Each culinary and food and beverage service department is open to 20 students and tuition is completely free of charge - including textbooks and the costs to purchase ingredients.

Another notable characteristic is its well-equipped kitchens. 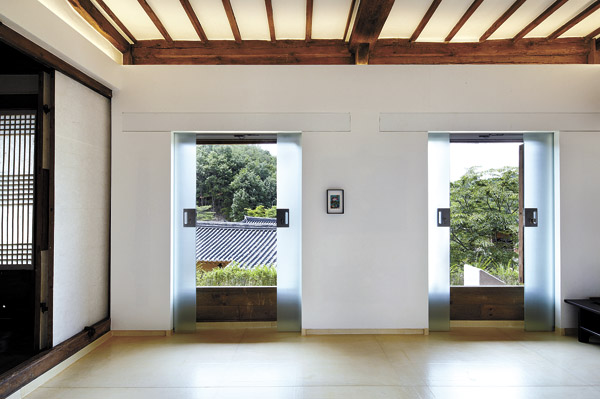 Usually, between three and five students form a team and share a single sink, gas stove and other cooking facilities at typical culinary colleges, but each student at the New School is given his or her own dedicated unit.

“This is truly focused on practice,” said Lee Kyung-ae, a manager at the New School.

“You will have to find somewhere else [to study at] if you need a place that can teach you techniques to pass culinary certificates.”

Corporate arts patronage is usually focused more on cultural activities such as fine arts, theatrics and classical music, but SK Group differentiates itself by nurturing social enterprises instead.

Unlike ordinary companies that prioritize turning a profit, the purpose of social ventures is to tackle issues in society by creating job opportunities for the underprivileged.

When asked why the group’s main focus is on companies in this category, Kim Young-beom, the PR team leader at SK, said that the company has fewer cultural activities compared to other conglomerates but that this is down to the vision of its chairman.

“He wants to build up a sustainable ecosystem by supporting social enterprises so that people [who are deprived of education and opportunities] are able to stand by themselves,” said Kim. 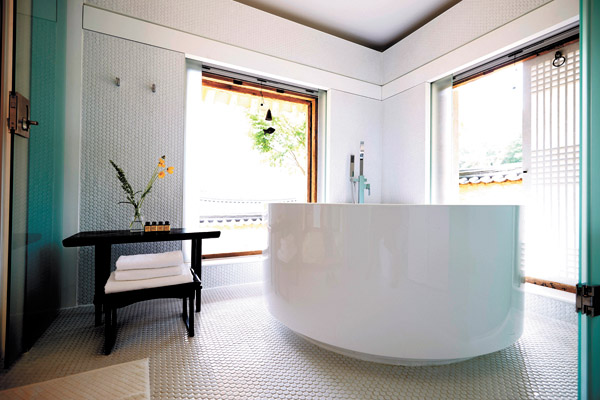 The support is also in line with SK Group’s long-time motto of “nurturing talent.”

At The Happiness Foundation alone, 23 social enterprises and related businesses are ongoing, including New School and Restaurant O-neul, and each has a different business model.

Happy New Life helps former prisoners return to local communities by teaching them various skills such as how to make coffee or clean laundry.

It also runs a cafe that some of the ex-inmates can be employed at.

Happy Boxed Meal is a small company that makes meals and delivers them in packages to people living outside of the government’s welfare safety net. It also hires people who need stable jobs.

When considering the vast number of cultural sponsorships available at The Happiness Foundation, critics could question whether the quality of the programs is high.

But Kim, the PR team head, explained that SK Group is not directly involved in these businesses.

“For each project, we have our own partners,” he explained.

“We sometime work with a small social enterprise by supporting it, or pair it up with the Korea Commission for Corporate Partnership. We also have [The Happiness] foundation that dedicates itself to corporate social responsibility programs. They are organically related to each other.”

For instance, O-neul develops recipes each season, and the restaurant recently donated a guide to making its waffles, one of the restaurant’s most popular desserts, to Happy New Life so that the staff at the cafe can make them for customers.

The waffle, which is made with mugwort rice cake, is as popular as the main dishes at the restaurant. It looks like an ordinary waffle, but the outside is crispy while the inside is chewy.

The culinary vocational school is a unique project for SK Group, but the conglomerate’s recent Gurume plan, in which it restored seven old Joseon Dynasty (1392-1910) houses in Andong, North Gyeongsang, is another example of its notable cultural work.

Called the Happy Traditional Village, it is also a social enterprise designed to create job opportunities in the local community.

The project was co-sponsored by SK Group, Andong’s government and the Ministry of Culture, Sports and Tourism.

The area is dubbed Gurume, which means “a happy village on a cloud.”

It is hard to imagine that the old wooden constructions were once on the verge of demolition, but “they only had frames,” according to Lee Hee-young, an official from The Happiness Foundation.

The foundation wants to raise awareness of traditional Korean houses by allowing guests to stay at the homes and also wants to develop some cultural and educational programs capitalizing on Gurume’s location because Andong is known as the home of many yangban, or the Joseon Dynasty’s noble classes.

The seven houses have different characteristics and structures because they were all built at different times.

In order to make the hanok more accessible, the interior of the seven buildings were renovated with modern technology.

For example, the doors were formerly plastered with sheets of hanji, or traditional paper, which biting winds can easily penetrate, but the hanok at Gurume have opaque glass inside their traditional entranceways.

Guests are able to lock the doors with a digital card key system once they check in, and the bathrooms have also all been revamped with modern facilities.

But the hanok still retain their old beauty because The Happiness Foundation wanted to keep modern factors at a minimum while maximizing the convenience of guests.

The cost to stay at one of the hanok in Gurume varies depending on which one is chosen, but prices start from 100,000 won a night. The accommodation includes breakfast for two.

The New School is recruiting students until Dec. 28.

Visit www.skhappyschool.com/xe/board03 to apply for the culinary vocational school.