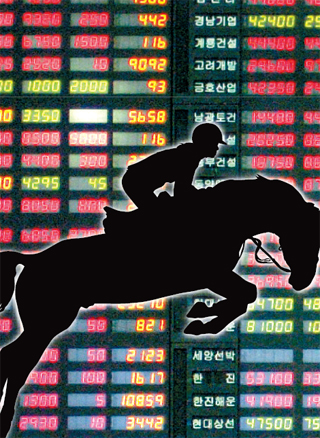 Financial authorities want to allow top state-run corporations such as the Korea Racing Association (KRA) to go public as part of their plan to scarf up funds and boost the slumping stock market.

“We will discuss with the central government letting those big state-run companies go public, companies like the KRA that produce strong profits are the targets,” said a spokesman for the Financial Services Commission (FSC) on Wednesday.

Financial authorities decided on the move when the government announced a plan to boost the nation’s capital market.

“We have been discussing the issue with government agencies related to the corporations that could possibly go public,” said the FSC spokesman. “But since it takes time, we won’t make any immediate moves, but we will continue to talk about the issue.” 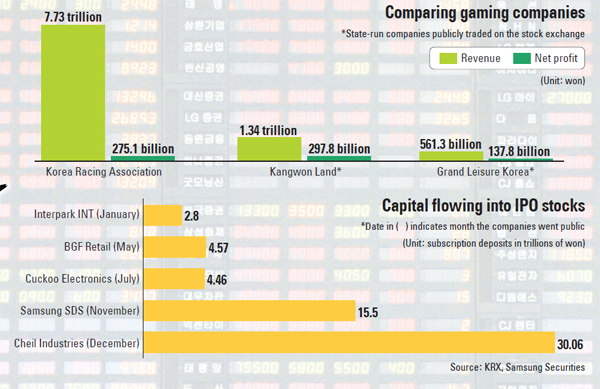 The core part of the FSC’s plan for boosting the capital market was to expand stock investments by institutional investors such as the National Pension Service (NPS), but the problem is that there are not many shares left to buy.

“It will not be easy for investors like the NPS to expand their investment because most of its budget has reached its maximum limit,” said the FSC spokesman.

The Korea Exchange has been encouraging state-run companies to go public as well.

“There are more than 100 companies that could be approved to go public within 24 hours if they just file an application,” said a spokesman for the exchange. “But most companies don’t have many problems operating their businesses as they have secured enough funds, meaning they don’t feel like they want to go public because they don’t want to have shareholders who could interfere in their business.”

Many investors, however, are thirsty for blue chips. Public offerings of companies such as Interpark INT, BGF Retail and Cuckoo Electronics attracted trillions of won from investors. For the Samsung SDS public offering, about 15 trillion won ($13.6 billion) came in, and Cheil Industries attracted about 30 trillion won earlier this month.

State-run companies are expected to attract much interest since many of them are monopolistic enterprises that generate consistent and solid profits. They also can offer higher dividends for investors than private companies.

“Even with big conglomerates such as Samsung Electronics and Hyundai Motor considering increasing dividends, those state-run corporation that can offer relatively high dividends will attract investors,” said Yoo Seung-min of Samsung Securities.

Government agencies including the Ministry of Strategy and Finance also think that letting state-run companies go public would be a good idea, not only as a way to stimulate the stock market, but to increase revenue by selling publicly held stakes.

“We believe it could also improve the overall financial management of state-run corporations,” said a spokesman of the Finance Ministry. “