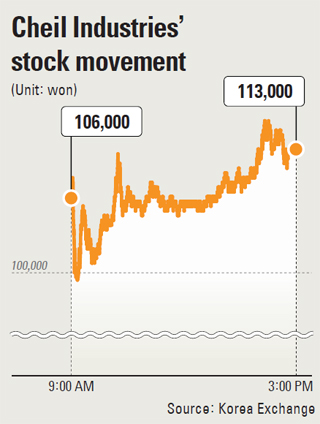 Cheil Industries, formerly known as Samsung Everland, opened at 100,500 won ($91) on the Kospi, which was double its initial public offering price of 53,000 won. The price of a debuting stock is usually set between 90 percent and 200 percent of the IPO price before regular trading begins at 9 a.m.

There were concerns the company’s stock could plunge on its debut, like that of Samsung SDS. Samsung SDS, an IT affiliate that made its stock market debut last month, also had a high starting price, but it fell 13.8 percent on the first day.

However, Cheil Industries was different. It closed at 113,000 won, up 6.6 percent from the opening price. In terms of market capitalization, the company was the 14th largest on the local bourse with 15.25 trillion won. More than 1.36 trillion won worth of shares were traded, a record for a debuting stock.

Cheil Industries, which has businesses in the fashion, construction, leisure and food industries, was the hottest expected IPO this year as investors applied for a record of 30.06 trillion won worth of shares during a two-day pre-order session last week. The amount easily surpassed the previous record of 19.84 trillion won for Samsung Life Insurance in 2010.

“Having a stake at Cheil Industries has more meaning than just being a shareholder of one company,” said Lee Kwang-soo, an analyst at Mirae Asset Securities. “As the value of the company increases, it becomes easier for the heir [Jay Y. Lee] to manage Samsung Group.”

Samsung Electronics Vice Chairman Jay Y. Lee, the only son of Chairman Lee Kun-hee, who has been hospitalized since May, is the largest shareholder of Cheil Industries with a 23.24 percent stake, or 31.36 million shares. His two younger sisters - Hotel Shilla President Lee Boo-jin and Cheil Industries President Lee Seo-hyun - each hold 7.75 percent.

Based on the closing price, the three children of Chairman Lee have made 5.9 trillion won in total from Cheil Industries’ listing. The younger Lees together made more than 5 trillion won following the listing of Samsung SDS last month.

Analysts predict that the three younger Lees will use their earnings from the IPOs to cover their
inheritance taxes and other costs of taking over their businesses. It is widely speculated that Jay will be taking the electronics, finance and construction companies, with Boo-jin taking the hotel and trading units and Seo-hyun managing fashion and media.

Samsung Group has been pressured by the government to unwind its complex circular shareholding structure that enabled the Lee family to control some 70 affiliates with a total stake of less than 2 percent. Some critics have been saying that Samsung should adopt a holding company structure to enhance transparency in the group’s management.

The most widely discussed scenario among analysts was that Samsung Electronics would be divided into two entities - a holding company and an electronics company - and the former would merge with Cheil Industries with Jay Y. Lee as its largest shareholder.