Cosmetics exports surge by 34 percent in 1st half

Cosmetics exports surge by 34 percent in 1st half 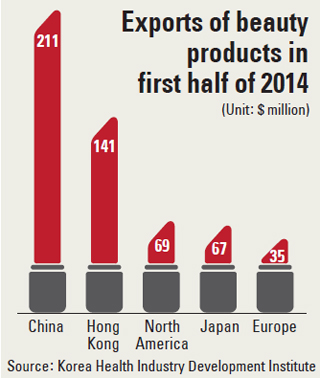 Combined exports of beauty products in the first half of this year increased by 34.5 percent to $740 million over the same period last year, according to a report released on Wednesday by the Korea Health Industry Development Institute.

The research institute partially attributed the increased exports to the widespread popularity of Korean pop culture. But the biggest growth was in Europe and North America, where K-pop and dramas are not as popular as in Asia, showing that some of the demand is due to product recognition.

Shipments of cosmetics to Europe in the first half rose from $20.3 million to $35.1 million, a 72.5 percent increase over the first quarter last year.

Exports to Canada and the United States jumped by 44.4 percent over the same period.

But Asian countries still imported the most.

China was the top importing country, with a value of $211 million, accounting for 28.6 percent of total exports. Hong Kong was the second largest, with $141 million, followed by the United States and Canada, with $69 million.

Japan came in at fourth, though in recent years it usually imports the second or third-most.

When it comes to the quantity of cosmetics exported, Japan ranked third behind Hong Kong, according to the Korea Customs Service. Last year, Japan was in second with 9.217 tons ahead of Hong Kong, which brought in 5,230 tons.

If cosmetic companies have a comparable performance in the second quarter, yearly exports of beauty products will likely hit a record. Makeup exports were worth $1.04 billion last year, which was also a record.