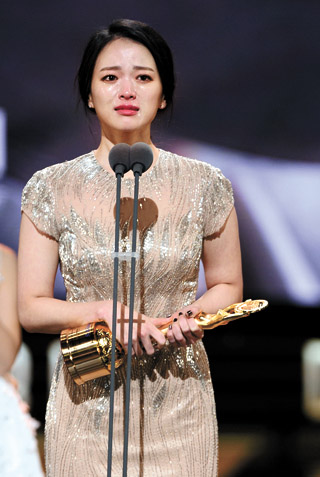 Actress Chun Woo-hee was a shining star at the Blue Dragon Awards, one of the most prestigious film awards in Korea, who won the best leading actress award for her small film “Han Gong-ju.”

The event was held on a chilly night of Wednesday at the Sejong Center for the Performing Arts.

Prominent actresses - Kim Hee-ae, Son Ye-jin and Shim Eun-kyung - were all nominated for the prize, but Chun came out on top. She was praised for skillfully expressing the complex and dark emotions of a high school girl who is dealing with a series of unfortunate incidents at school.

“I can’t believe the award went to such a small film and to a not-so-famous actress like me,” the 27-year-old said in her acceptance speech, after a long pause during which she wiped away tears.

“I believe the award is to encourage me not to give up. I will work harder and with more confidence.”

The award came as a surprise for many. Although “Han Gong-ju” won accolades for its deep look at serious social issues and drew in 220,000 viewers, a large number for an indie film, major film awards are rarely given outside the circle of big commercial films with popular actors.

But Chun’s work in the film apparently impressed viewers as well as critics.

Along with the Blue Dragon Awards, the film also won three other awards this year, including the rookie award at the 14th Director’s Cut Awards and the actress of the year at the 34th Korean Association of Film Critics Awards.

Another unforeseen result was the victory of “The Attorney,” which nabbed four awards at the ceremony, while “Roaring Currents” received two.

“The Attorney,” which is loosely based on the life of former President Roh Moo-hyun, was selected as film of the year. It also took best actor award for Song Kang-ho, best supporting actress award for Kim Young-ae and popular star award for Yim Si-wan.