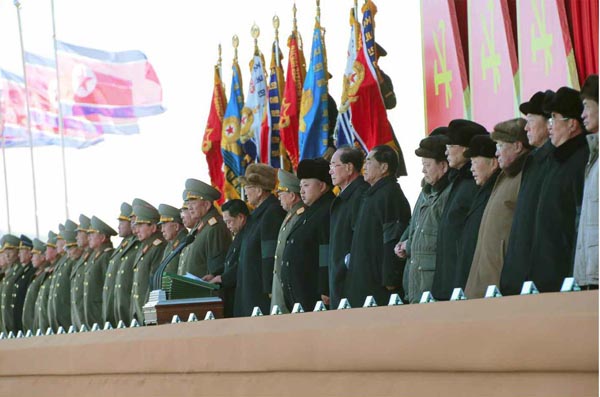 Top North Korean officials including the country’s leader Kim Jong-un, ninth from right, stand at the VIP podium of Jusokdan at a memorial event to mark the third anniversary of Kim Jong-il’s death on Wednesday. Provided by the Rodong Shinmun

North Korea held a massive outdoor gathering Wednesday to mark the third anniversary of the death of Kim Jong-il, the father of current ruler Kim Jong-un, despite freezing temperatures and icy winds in Pyongyang.

An analysis of the top-ranking participants showed no signs of a major reshuffle in Pyongyang’s power elite over recent months.

State-run Korean Central Television aired the memorial, which was attended by tens of thousands of residents, soldiers and students Wednesday afternoon.

A group of top officials from the Workers’ Party as well as government and military officials appeared atop the Jusokdan, the VIP podium. Such gatherings have long been used by outside observers to analyze the current lineup of the power elite of the reclusive Communist country.

North Korean leader Kim Jong-un stood at the center of the podium and Choe Ryong-hae, a senior official of the Workers’ Party, stood next to him on his right, confirming that he is the second most powerful man in the North.

Gen. Hwang Pyong-so, director of the General Political Bureau of the Army, stood next to Choe on his right. Other military officials, including Hyon Yong-chol and Ri Yong-gil, stood beyond them.

All the officials on the VIP podium were those who stood there last year except for General Hwang.

The event took place in the plaza in front of Kumsusan Palace of the Sun, which serves as the mausoleum for Kim Il Sung and Kim Jong-il, grandfather and father of the current ruler. Memorial events in 2012 and 2013 were hosted inside the Pyongyang Sports Center. The North apparently held a massive outdoor gathering this year despite poor weather conditions because it marked the end of the traditional three-year Korean mourning period, the Ministry of Unification in Seoul said.

Kim Yong-nam opened the ceremony with a speech that lasted more than 20 minutes. The 86-year-old nominal head of state could not speak smoothly due to the cold and needed assistance to turn the pages of his speech.

Wearing a black coat and a fur hat, Kim Jong-un could be seen hunched against the winds.

Due to the cold weather, civilians and soldiers continuously shivered, a rare scene in the North where people’s postures are carefully controlled during such public events.

“For an event attended by Kim Jong-un, the residents were told to line up in preparation for about four hours in advance,” said Dr. Ahn Chan-il, a former defector who now heads the World North Korea Research Center. “They must have been extremely uncomfortable.”

Another report was also aired Wednesday showing Kim Jong-un, his wife Ri Sol-ju and other North Korean officials paying their respects at the mausoleum of Kim Jong-il.

In the front row were the North’s first couple in addition to officials who were atop the Jusokdan as well as other senior officials from the military, party and government. More senior officials including Kim Yang-gon, a Workers’ Party secretary in charge of South Korean affairs, stood in the second row.

Conspicuously missing were Kim’s family members. Kim Kyong-hui, the aunt of the current ruler and the younger sister of the late leader, did not join the events. Her husband Jang Song-thaek was executed a year ago for high treason and his widow has dropped from public view. There are rumors she is gravely ill or dead.

While no major sign of change in the country’s most elite power circle was evident, two officials resurfaced after mysterious disappearances.

Gen. Choe Pu-il, minister of People’s Security, who was rumored to be purged or executed after a deadly collapse of an apartment project last May, made an appearance at the memorial. The latest reports showed that he was demoted by two ranks.

Kim Kyong-ok, a senior deputy director of the Korean Workers’ Party’s powerful Organization Guidance Department, was also rumored to be executed, but he attended the memorial.