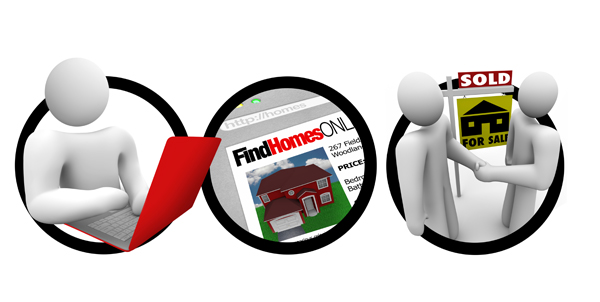 Direct transactions via blogs, Internet communities or smartphone applications are a popular way of buying things these days - including real estate.

According to the IT industry, there are more than 2,400 Internet communities, cafes and blogs - and around 200 smartphone applications - that offer house-hunting services of various kinds. They welcome both buyers and renters.

The online real estate market began as a way of sharing information among people who live alone and who were looking for a studio or house to rent in big cities like Seoul. That information sharing has extended to different types of transactions. 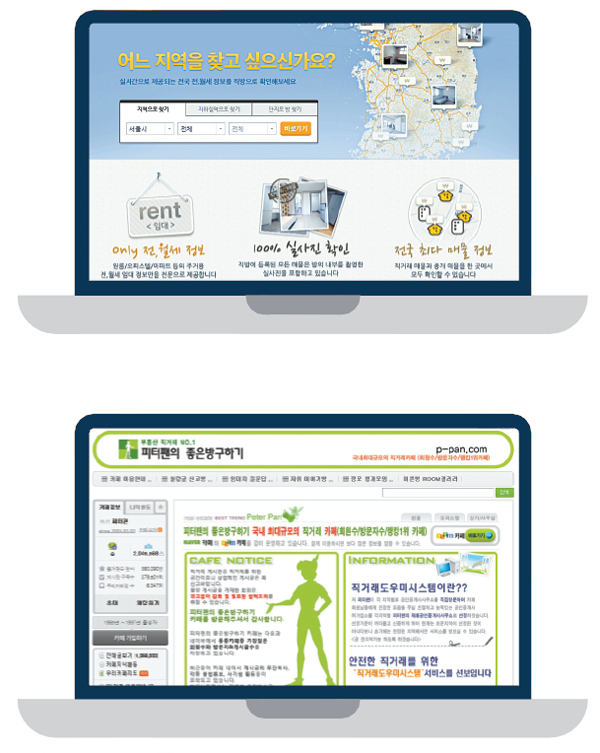 One of most popular smartphone applications with more than five million downloads is Zig Bang, which launched in 2012.

Before the Internet, people who wanted to sell property or find tenants used to post notices on the gate of the house or on neighborhood utility poles.

In the early 1990s, free magazines or newspapers became the new advertising vehicle for properties. Once the Internet appeared, direct transactions started to take place online.

Property hunting online began in the early 2000s by real estate information providers that ran real estate websites for commercial purposes. Those websites primarily focused on selling commercial buildings or land for investment purposes. Owners registered their properties with the websites and looked for buyers.

Online property searches then became popular among ordinary Internet users. One of most famous Internet real estate destinations created by an ordinary user was Peter Pan’s How to Find Good Rooms on Naver, the nation’s largest portal. Created in 2004, the so-called cafe now has more than two million members.

It was started as a private group for people who lived alone in studio apartments. As the number of members rose and they shared information about living alone, the community developed into a public website where information about residences for rent or sale was available. There is also a smartphone application for the cafe.

“In the beginning, transactions were small, such as finding a roommate or monthly rentals,” said a member of the cafe. “These days, jeonse and even sale contracts are signed.”

According to the member, there are about 3,000 new posts about rooms or houses every day.

Lee Jung-won, a 26-year-old graduate school student at Yonsei University, found a studio apartment in Yeonhui-dong, near the school, on an Internet community in February.

Because he is preparing to leave for the United States next year, finding a room through a real estate agency felt like a waste of time and money. During his undergraduate years, Lee had to use real estate agencies to find rooms to rent every other year after his current contract expired because he comes from Jeonju, North Jeolla. When contracts were renewed, he had to pay additional commissions to agencies.

“Paying the commissions felt like a waste,” Lee said. “On the Internet, I can find places by myself without the help of agencies. So both the homeowner and tenants don’t need to pay the fees.”

But in online transactions, the sellers and buyers simply follow the legal procedures, signing a contract and registering with the authorities.

“It was no problem because I am quite familiar with the legal process,” said Kim Young-jin, a 34-year-old working mother who recently purchased an apartment via one of the real estate websites. “As a working mom, such online sales are very convenient, because I hardly have time to walk around with realtors to visit available houses.”

Another good thing about direct property transactions online is access to information that used to exclusive for realtors, Lee said.

“When you go to realtors, we don’t know what properties they have to show, and we can be played around, because we don’t know the neighborhoods,” Lee said.

On property websites, however, you can see all the apartments in an area you want to live in, so you get enough information to find better ones.

As the number of people who prefer online transactions rises, even realtors have joined the bandwagon. Some realtors visit those websites in order to compare properties they have.

“I often contact people who advertised their properties on websites in order to help find buyers or renters, said a 46-year-old realtor surnamed Park in Seodaemun, central Seoul. “As the number of people who come to real estate agencies declines, we have to adapt for survival.”

The government plans to slash the commission fee from 0.9 percent to 0.5 percent next year in order to boost the real estate market, judging that high commissions are one factor putting off potential buyers.

Some realtors are opposed to the plan, but some others are seeking new ways to survive by trying to use social media and the Internet.

A group of realtors run another so-called Internet cafe on Naver, offering real-time consultations on KakaoTalk, and they offer a fixed commission rate of 0.2 percent to attract customers.