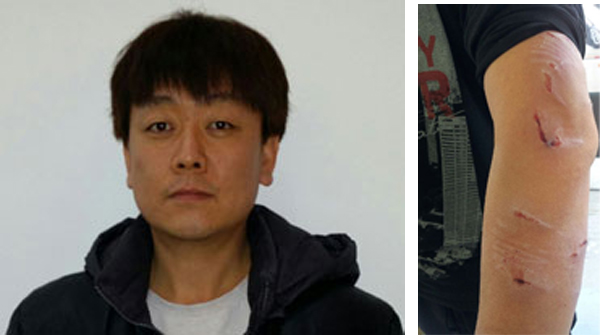 Kim Min-soo hurt his arm after he jumped in to save a fourth grader who was about to be attacked by a dog. Kim still has scars from the incident. By Jang Joo-young

Last November, he witnessed a group of terrified fourth graders frantically sprinting away from the entrance of a commercial building in South Chungcheong, where a menacing Korean hunting dog, commonly known as a Jindo, stood growling.

But one child had missed the opportunity to flee and was now cautiously stepping back from the animal. As the student fell to the ground, the Jindo aggressively ran forward.

It was at that moment that Kim ran to intervene, grabbing the dog by its scruff.

Instead of mauling the child, the dog ran toward Kim and bit him.

His arm starting spurting blood. The scars were so deep that he was carried to a hospital to receive treatment.

“Even though it’s been a little more than a year, I still have teeth marks on my arm,” Kim said in a telephone interview with the JoongAng Ilbo. “It was such a relief that the kid didn’t get hurt.”

Kim was recently honored at the 2014 Citizen Hero Awards, hosted by S-Oil and sponsored by the Ministry of Health and Welfare, National Police Office and JoongAng Ilbo.

The award seeks to recognized those who were willing to risk danger - even put their lives on the line - to help others.

Nasser Al-Mahasher, the CEO of S-Oil, expressed his admiration at the awards ceremony for those willing to sacrifice themselves and risk their own safety. Mahasher said he would continue supporting those people through the Citizen Hero Awards.

He added that he hoped the award would contribute to making Korean society healthier as well as more conscientious.

Those who lose their lives in helping or saving others are recognized as heroes, while those who are injured are awarded as Good Samaritans.

Thankfully there were no deaths this year, and the 16 who were awarded as Good Samaritans were praised for their sacrifices and selflessness.

Among those awarded were Kim Min-soo, who saved the child from the Jindo; Kim Chung-seong, who saved a child from drowning at sea; and two high school students who called emergency medical authorities after an elderly woman collapsed on the street.

The sum amounted to 140 million won.

Over the past seven years, S-Oil has presented 980 million won to 120 everyday citizens recognized as heroes and Good Samaritans.