In a landmark ruling, the Constitutional Court ordered Friday the dissolution of a leftist political party for its pro-North Korea doctrine and removed all five of its lawmakers from the National Assembly.

It is the first time a court ordered a political party to disband in Korea’s constitutional history.

Ending more than a year of deliberations on the Park Geun-hye administration’s petition to disband the third-largest party in the legislature, Justice Park Han-chul, the president of the Constitutional Court, announced that the decision to dissolve the Unified Progressive Party (UPP) was supported by eight out of nine judges on the bench. Only Justice Kim Yi-su disagreed, according to Park.

“The doctrine of the Unified Progressive Party included ‘progressive democracy’ in pursuit of the North Korean style of socialism,” Justice Park said, explaining the court’s ruling. 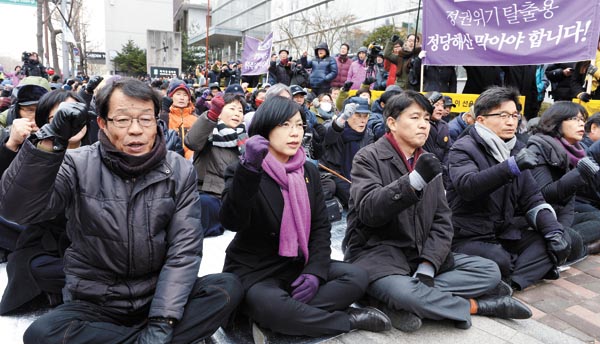 Unified Progressive Party Chairwoman Lee Jung-hee and party members stage a sit-in near Anguk Station in central Seoul on Friday to protest the Constitutional Court’s order earlier in the day to disband the leftist political party. By Kim Sung-ryong

He also said the UPP is a political party led by pro-Pyongyang groups and its core purpose was against the basic order of democracy.

Park said the party’s activities were unconstitutional taking into account the conviction of its representative, Lee Seok-ki, a rigged primary for proportional representatives and the use of violence during the party’s central committee meeting.

“Taking into account the peculiar nature of the Korean Peninsula in which the country is having a sharp confrontation against North Korea, the threats from the UPP are more than abstract,” Park said. “They are clear and present dangers that can bring about actual harm.”

The government took the unprecedented step of asking the Constitutional Court to dissolve the UPP for its alleged links to North Korea on Nov. 5, 2013, following an investigation into the party’s lawmakers including Lee and other senior officials on charges of treason. Lee was convicted of discussing an armed rebellion and forming a pro-Pyongyang underground group called the RO, or the Revolutionary Organization. The case is being appealed to the Supreme Court.

The Constitutional Court also ruled that the treason case against Lee should be seen as an activity of the UPP.

“Putting together Lee’s status as the head of the Gyeonggi Dongbu Alliance and the UPP’s party-wide attitude to protect Lee, the meetings [of the RO led by Lee] were part of the UPP’s activities,” Justice Park said.

The Gyeonggi Dongbu Alliance is a regional chapter of the Association for Democracy and Reunification of Korea, established in 1991 by members of the National Liberalization Group, the largest faction inside the UPP. They are mostly former left-wing student activists and included Lee and the UPP Chairwoman Lee Jung-hee. The group is often accused of supporting North Korea’s Juche (self-reliance) ideology.

The Constitutional Court also granted the Justice Ministry’s request to strip the UPP’s five lawmakers of their seats in the National Assembly.

“Keeping the lawmakers of the UPP in the legislature despite the party’s dissolution amounts to maintaining the party,” Park said. “Although there was no law stipulating the status of the lawmakers, it is appropriate to interpret that their seats are lost.”

Under the court’s order, three geographical constituencies represented by UPP lawmakers will hold by-elections in April. Two proportional representative seats, which were held by Lee and Kim Jae-yeon, will be left vacant until the next general election in 2016.

After Park finished reading the verdict, UPP Chairwoman Lee stood motionless for about five minutes inside the courtroom. She held a press conference afterward.

“The Park Geun-hye administration degraded this country to a dictatorship,” said Lee, a former UPP presidential candidate for the 2012 race who had previously said her bid was to stop Park from being elected.

She also denounced the Constitutional Court for its decision.

“With a judgment that employed fictions and imagination, the court opened the door to totalitarianism,” Lee said.

“Starting today, the doctrines of independence, democracy, equality, peace and unification and politics for the laborers, farmers and the people are banned.

“I apologize before the people for having failed to fulfill my responsibility of defending democracy,” Lee said. “We will continue walking on our path of progressive politics.”

“It was a judgment that protects our constitution against the enemy that threatens the basic orders of our liberal democracy,” he said.

“The ruling was a stern judgment against those denying the Republic of Korea’s legitimacy,” said Rep. Park Dae-chul, spokesman of the Saenuri Party. “It is a victory for the Constitution and a victory for liberal democracy.”

He said the pro-North group that attempted to deny the country’s Constitution and acted to benefit the enemy by hiding behind a shield of democracy must be expelled.

“The NPAD reluctantly accepts the court’s ruling,” said Rep. Park Soo-hyun, spokesman of the party. “We also express serious concerns that the freedom to establish a political party was infringed.”

He said the largest opposition party never approved of the UPP, but whether to dissolve the party or not should have been left to the people.

The National Election Commission said it began the procedures to dissolve the UPP by seizing the party’s accounts immediately after the court’s ruling.

Based on the ruling, members of the UPP are also barred from creating another political party with the same party platforms. The party’s name can never be used again.

The five UPP lawmakers whose seats were forfeited will be able to run again in the next elections as long as they qualify for candidacies.

“The Public Official Election Act has no clauses barring them from running in elections, so they are eligible,” said Moon Byeong-gil, spokesman of the National Election Commission.

Formally launched on Dec. 5, 2011, the UPP was created by merging progressive politicians including those from the Democratic Labor Party ahead of the legislative and presidential elections of 2012. In the April 2012 general elections, the UPP won 13 seats, becoming the third-largest political party inside the National Assembly. A schism, however, erupted over a rigged primary and some key members abandoned the party only 10 months after its foundation.

The Supreme Court is still deliberating appeals by both the prosecution and Lee Seok-ki on treason charges, and it remains to be seen how it will conclude the case.

Although the Suwon District Court convicted Lee in February of conspiring to overthrow the government in the event of a war with North Korea, the Seoul High Court acquitted him on the charges in August.

At the time, the appeals court ruled that there was not sufficient evidence to believe that Lee had plotted to overthrow the government, but it still found him guilty of having discussions on instigating an armed rebellion, though he and his associates had stopped short of actually drawing up a detailed plan.

The treason case against Lee was the trigger for the Park administration’s move to outlaw the UPP.