It’s the most wonderful time for a creative date

It’s the most wonderful time for a creative date 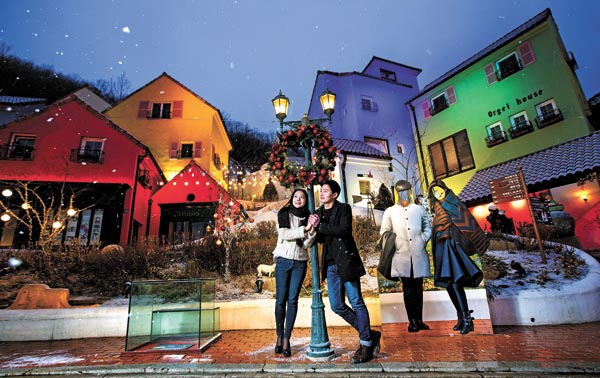 In Petite France, a small village with French houses in Gapyeong, Gyeonggi, couples can act like the leads in the hit drama series “My Love From the Star” when the village turns off its lights one by one. The show’s passionate kiss scene was filmed there. By Ahn Sung-sik


Worldwide, Christmas is traditionally a day for family get-togethers, but in Korea it is considered a special day for couples.

Because the day is marketed toward people in relationships, many of those with partners rack their brains to impress their significant others with special, alternative dates. 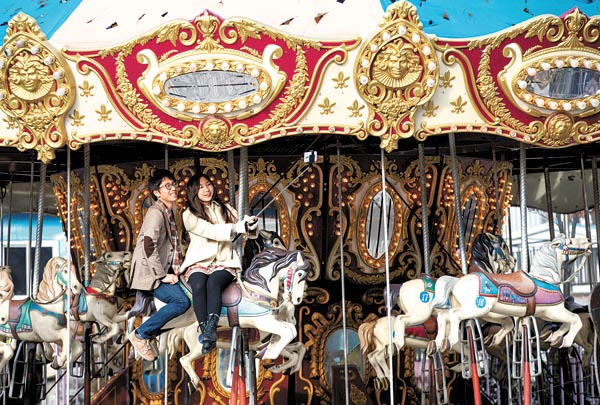 For anyone who wants to whisk someone away on an impressive getaway this Christmas Day, the JoongAng Ilbo, an affiliate of the Korea JoongAng Daily, has come up with four recommendations. 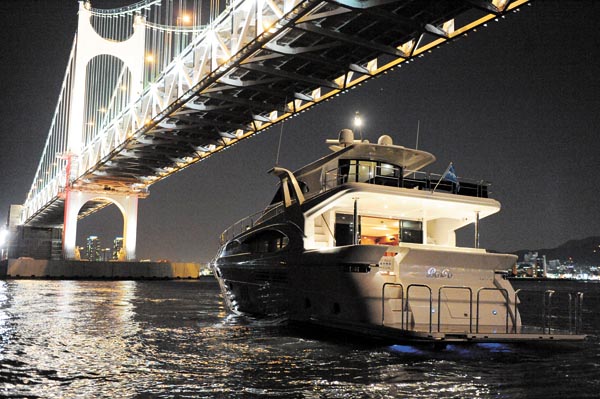 Gapyeong in Gyeonggi turns into a romantic place around this time of year. In broad daylight, everything is covered in snow, but when the sun goes down, Gapyeong’s sightseeing spots shine.

From the city’s train station, the Gapyeong City Tour Bus is highly recommended as it stops at major sightseeing places in the city. The fare per person is 5,000 won ($4.50) for the whole day. It only operates at intervals of 60 minutes, however, so checking out the timetable is necessary.

The first place to spend some time is Nami Island, just one stop away from Gapyeong Station.

Transfer to a ferry that carries passengers from the mainland to the island. It costs 10,000 won per person for a round-trip and a single ride takes less than five minutes.

Nami Island is a well-known destination because of its tree-dotted promenade, but it offers something different every season. Winter is probably the most romantic time of year to explore the area.

After a walk, try some Chinese food at Huajia YiYuan, which has been selected as one of the top 10 Chinese restaurants on the mainland. The Chinese branch on the island is the only one in Korea.

The best-selling dish is Peking duck, which costs 60,000 won for two people.

The next stop is Petite France. This small village has traditional French houses from the 19th century and also displays antiques from the country.

The village has long been popular for its quaint architecture, but it became more well known recently as the filming location for the hit drama series “My Love From the Star.”

Kim Soo-hyun and Jun Ji-hyun, the show’s lead actors, shared a passionate kiss there. As a result, the French town enables guests to act as the fictional couple for a few minutes when it turns off its lights one by one at 7:10 p.m. every evening so that visitors are able to imitate the scene.

Starting this month, Petite France will extend its operating hours to 9 p.m. Admission is 8,000 won for one person.

Since the last Gapyeong City Tour Bus departs at 6:40 p.m., visitors will have to take a taxi from Petite France to a nearby train station if they want to stay late at the village. The nearest train station is Gapyeong Station.

Gapyeong is accessible from downtown Seoul. From Yongsan Station to Gapyeong Station, a single train trip only takes an hour on the ITX-Cheongchun train.

Of the many ITX-Cheongchun trains, there is a double-decker version that departs from Yongsan Station if you are looking for an interesting ride.

You can reserve seats on letskorail.com. A single trip costs 4,800 won per person.

Grab a camera and document your day this Christmas.

If you want to get the best photos, head to the unique venues located in the northern part of Seoul.

The first is Yongma Land, a small, deserted amusement park. The fun fair shut down in 2011, but dilapidated rides such as a merry-go-round and bumper cars are still there, evoking a strange, eerie feeling with their rusty, worn-out exteriors.

The facility is likely to be renovated sometime next year, so you’d better hurry up if you want to take pictures against the backdrop of vintage-looking rides.

The Buk Seoul Museum of Art, which opened last year in Junggye-dong, Nowon District, is another excellent venue. Pose for a photo in front of the main building, which received last year’s grand prize from the Seoul Architecture Award, and you’ll get good shots no matter how bad you are at taking photos.

All the museum’s art exhibitions are free of charge throughout the year.

After your photo session, head inside to experience the art or sip on a cup of Americano at the cafe located across the first and second floors of the main building.

Had enough of pictures with snow? Head to the Dream Forest in Beon-dong, Gangbuk District, for a green walking path dotted with bamboo trees.

Another photo zone in the spacious forest is the Moon Reflecting Pond.

Maylin, a Chinese restaurant nestled inside the forest, is the only local place for dining out.

If you can’t think of Christmas without thinking of cake, Darlings Cake is a good place to fulfill your needs.

At the cooking studio located near Hongik University in western Seoul, visitors are able to make desserts by themselves.

Targeting the holiday season, the cooking studio is throwing a three-day cake class between Dec. 23 and 25.

Two pastry chefs will help participants make and bake a buche de Noel - a Christmas cake served in France that looks like a log.

“We see many couples on special occasions. So don’t be shy if you think the cooking class is too much for a man,” said Jeon Hye-sun, the owner of the cooking studio.

People are allowed to eat the cake on the spot or bring it home.

Making a special Christmas dinner is another way to enjoy Christmas Day in a different form.

With the aid of a professional chef, couples are able to choose whether they want to learn how to cook up a steak, creamy pasta or an oily pasta dish at E-cook Academy, located near Hongik University.

The lesson takes about two hours and 30 minutes and is priced at 90,000 won for two persons. Two glasses of wine are included.

Each culinary class is open to five couples.

Programs such as DIY ring-making are also popular among people who want to make their own Christmas gifts. Participants are able to learn how to polish rings and engrave letters inside them.

The starting price for a pair of silver rings is 100,000 won at Ring Village. Extra charges are added to decorate the rings with gems.

This DIY ring workshop is a franchise with branches across the nation.

The class takes about two hours.

Heading down to Busan is one way to get away from all-too-common Christmas dates in Seoul.

Particularly notable is the port city’s many yacht tours.

One recommended sailing trip leaves from the Busan Exhibition and Convention Center (Bexco). It has a Christmas-themed yacht that accommodates up to 26 people.

The Christmas yacht departs from Suyeong Bay Yachting Center at 7 p.m. on Christmas Eve and takes its passengers to Marine City, where skyscrapers are densely located, and on to Haeundae Beach and Gwangan Bridge for about two hours.

Another yacht tour provided by The Bay 101 has a sunset tour that departs at 5:30 p.m. According to the company, about 70 percent of the passengers are couples.

The sunset tour, available with two types of yachts, patrols around the sea of Busan for about 90 minutes.

A smaller yacht accommodates 30 people while a large yacht is capable of having up to 120 people at a time.

The sunset yacht tour is priced at 110,000 won per person and it includes light snacks.

After the yacht tour, do not miss out on the Busan Christmas Tree Festival that takes place on Gwangbok Road. During the festival period, the venue is decorated with gigantic Christmas trees and glittering lights. Artificial snow is sprinkled every day at 7 p.m. and 8 p.m.

The festival runs through Jan. 4.

After enjoying all of these activities, take the last Mugunghwa train that departs from Busan Station at 11:10 p.m. to Seoul.