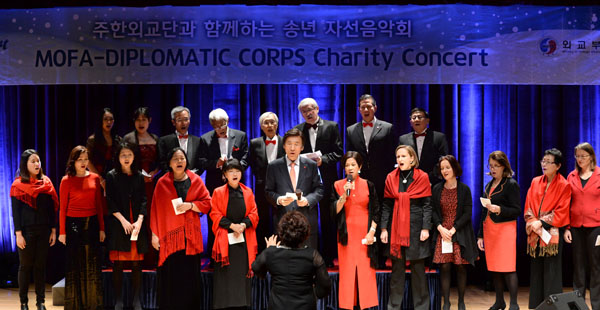 A week ahead of Christmas, over 350 people, including ambassadors from over 40 countries, as well as Korean officials, attended a charity concert in the auditorium of the Ministry of Foreign Affairs (MOFA) in central Seoul to celebrate music and dance from around the world.

It was a rare opportunity for the diplomatic corps, their families and embassy staffs to showcase their musical talents to a multicultural audience, ranging from Christmas songs on guitar to jazz renditions on piano.

This is the second consecutive year the Foreign Ministry and diplomatic corps held a joint charity concert with 13 performances on Tuesday by diplomats and foreign ministry officials.

However, the highlight of the evening was when the Diplomats’ Choir, comprised of ambassadors and spouses from countries including Austria, Brunei Darussalam, Malaysia, the Philippines, Poland and Singapore, took to the stage.

They sang “Longing for Mount Kumgang,” a South Korean song describing the yearning to see the mountain in North Korea, a symbol of unity for the Korean Peninsula.

Ambassador of Brunei Darussalam Dato Haji Harun Ismail, dean of the diplomatic corps, said, “The purpose of the charity is to raise funds on humanitarian grounds to be donated to the UNHCR [United Nations High Commissioner for Refugees] to help Syrian refugees. Today, we are trying to do our bit to enlighten and lessen their problems through a charitable cause.”

According to the UNHCR, there were over 3 million Syrian refugees as of September and the proceeds from the concert were to be donated to the UNHCR Emergency Response Fund.

Ismail added that the diplomats’ “hidden talents and sense of musical ability is really amazing.”

Minister of Foreign Affairs Yun Byung-se said, “It was just this time last year I revived the MOFA concert out of a long-time hibernation. At that time, I was not sure about it, but after the response I was motivated not merely to carry it on but make it even more fabulous.”

Last year, the 2013 MOFA-Diplomatic Corps Charity Concert raised 1.5 million won [$1,635] for another charity cause. This year it surpassed that by raising 11 million won.

Yun added that the song “Mount Kumgang” holds special significance to him. “Early this year, when my president made a speech in Dresden on Korean reunification, many Koreans there almost burst into tears after hearing this song,” he said.

He was referring to President Park Geun-hye’s trip to Dresden, Germany, in March, where she made a speech on reunification of the Korean Peninsula in the former East German city.

And in a surprise performance, Yun joined the Diplomats’ Choir on stage to sing “One Fine Day in December,” popular at Korean weddings, as well as the finale “Arirang,” which is recognized by Unesco as an intangible Cultural Heritage item for Korea.

Performances were not limited to the top envoys. Children of embassy officials showcased their talents, by performing a captivating traditional Ecuadorian dance and a solo of a well-known Belarusian folk song “Kupalinka.”

Six members of a dance team from the Russian Embassy School in central Seoul danced a Russian folk dance, “Gusachok,” which literally translates to “goose dance.”

Nastya Shcherbakova 13, from the dance ensemble Moscovia at the Russian Embassy School said, “We spent one month practicing on top of school work.” She admitted she was nervous to perform in front of an audience of both Korean government officials and most of the diplomatic corps.

But she added it was a meaningful opportunity for her dance group. “We want to show through our dance our big and beautiful country and its culture and how it is different and interesting.”