On the front line of Korea’s campaign for energy security

On the front line of Korea’s campaign for energy security 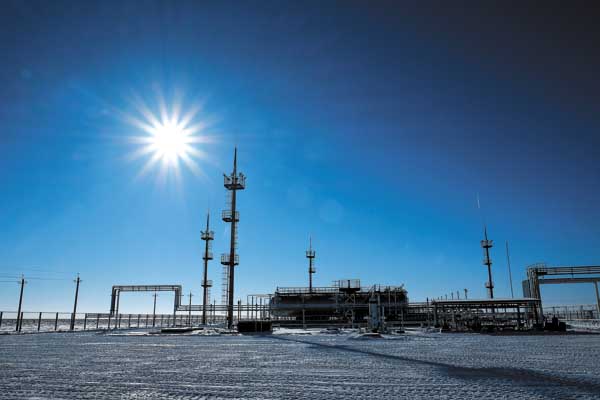 The Arystan oil field, developed and operated by Korea National Oil Corp. in western Kazakhstan, produces more than 6,000 barrels a day. Provided by the company

AKTAU, Kazakhstan - Korea’s flag, the taegeukgi, flaps in the wind next to an oil drill sitting in the wide open spaces near Aktau, Kazakhstan. This oil drilling operation on the Caspian Sea in westernmost Kazakhstan is a 15-hour flight from Incheon International Airport.

Six engineers from Korean National Oil Corp. (KNOC) were busy checking storage facilities on Dec. 7 in temperatures as low as minus 30 degrees Celsius (minus 22 degrees Fahrenheit). The engineers were looking for frozen pipes, because the oil needs to be kept at 50 degrees Celsius.

The engineers were working two-week shifts without complaint in the middle of this barren, leaving families and friends behind, for oil, a critical resource that Korea can only obtain from abroad.

“I get to see my wife and children about once in a month, because I don’t want to leave the field while the facilities operate 24 hours, seven days,” says Jun Yeong-jin, deputy general director of the Arystan oil field. “Although it’s a tough place to live, we believe this business has bright prospects.”

The Arystan field is one of the state-run oil company’s biggest successes. Many of KNOC’s overseas oil fields end up failing and are severely criticized by the Korean public.

KNOC has been one of most-discussed subjects since this year’s National Assembly audit sessions in October, when opposition lawmakers blamed the failed oil fields on careless decisions during the Lee Myung-bak administration’s push for the national oil company to start as many overseas drilling projects as possible to promote the president’s progress toward Korea’s energy independence.

Three liberal political and civic groups accused six current and former CEOs of three state-run resource developers of embezzlement and dereliction of duty. They filed their complaints with prosecutors on Nov. 4, saying that slapdash investment decisions resulted in a total loss of 35 trillion won ($32 billion) out of a total of 40 trillion won in government investments during Lee’s five-year term.

The investments in overseas-based oil, gas and mineral fields were a way for the Lee administration to regain public favor after a highly turbulent start in which Lee pushed controversial projects like the continued import of American beef when people feared mad cow disease.

“I understand that the issue of alleged corruption involving our overseas resource development projects stirred the Korean public,” says Shin Seok-woo, general director of the KNOC Caspian branch based in Almaty, Kazakhstan. “The politicians made it seem that KNOC failed in every project it entered, but that’s not true with our business in Kazakhstan.

“When drilling, reality isn’t like what we usually see in movies. Oil comes out of small holes. Our employees here every year make the daily production of 6,000 barrels by collecting it little by little. I hope people at home recognize how hard our employees work and their commitment to procuring an independent source of oil in a difficult work environment with tough regulations.”

When KNOC acquired 85 percent of Kazakh private oil company Sumbe, the original owner, in 2010, the Arystan oil field was a barren, frozen land. The Korean company took charge of all aspects of development, from studying geological conditions to locating oil deposits to building production facilities. About $100 million was invested.

In April, the oil field finally started production. KNOC obtained a license to operate the oil field, which is estimated to have reserves of 55 million barrels, until 2037.

KNOC has seven more oil fields in Kazakhstan producing 23,000 barrels a day, making the company the 11th-largest oil producer in the nation after Kazakh national oil company KMG, Chevron and Chinese state-run oil companies. Most of the oil is sold to Europe and inside Kazakhstan.

Korea still relies on oil from the Middle East mostly because it is cheaper than oil produced by a Korean company in places like Kazakhstan.

“Technically, we can bring oil produced here to Korea both by land and via oil tankers, but this adds as much as 13 percent to the cost of shipping,” says Shin. “That is why we sell the oil where it is produced and send the revenue to Korea.

“The oil fields KNOC operates in the United Kingdom and Canada have been stable sources of production for us, but they produce relatively low returns. On the other hand, Kazakhstan is a difficult place to do business, but the market represents an opportunity we shouldn’t miss.”

Although he and his employees are concerned about plunging oil prices, he says, the KNOC Kazakhstan office aims to double its sales by 2018 and boost daily production by 50 percent.

Korea is vulnerable when it comes to energy as the country competes with neighboring countries, notably China, to meet internal energy demand, said Sohn Yang-hoon, president of the Korea Energy Economics Institute (KEEI) at a national policy development forum.

In Kazakhstan, Shin says KNOC is the world’s 60th-largest national oil company, a small size compared to Korea’s annual oil consumption and the size of its economy.

According to data compiled by BP, Korea was the world’s eighth largest oil consumer last year and is totally reliant on imports, as are third-ranked Japan and No. 10 Germany.

Because traditional energy sources will be crucial for near future, Shin hopes the Korean government develops more consistent energy policies like China. In Kazakhstan alone, China has invested about $50 billion and has oil reserves estimated at 1.9 billion barrels, about 15 times larger than Korea’s.

“Several Chinese geologists [employees of oil companies] visited our office yesterday, asking if we’re selling shares of any of our oil fields,” says Shin. “Chinese oil companies can continue their work even with low oil prices, because the Chinese central government has an independent agency that keeps resource policies consistent and gives low-interest loans to Chinese companies.”

However, the corruption scandal involving the former president resulted in a drastic drop in Korea’s budget for oil development for next year to 57 billion won, only 4.5 percent of the 1.25 trillion won allotted in 2010.

“Now is the time when Korea should start seeking oil fields that are for sale because oil prices are dropping,” says Shin.