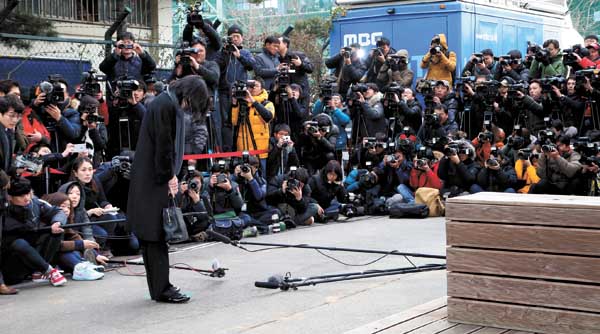 Former Korean Air Vice President Cho Hyun-ah hangs her head in shame before entering the Gimpo International Airport for questioning over the Dec. 5 incident that delayed a KAL flight in New York with about 150 passengers for 11 minutes. By Kim Kyung-hee

Companies should start from the bottom at times of crisis, but Korean Air failed to do so, said Yoon Ho-il, a researcher at the Korea Institute of Ocean Science and Technology, during his Dec. 17 speech at the Samsung Electronics building in Seocho District, southern Seoul. 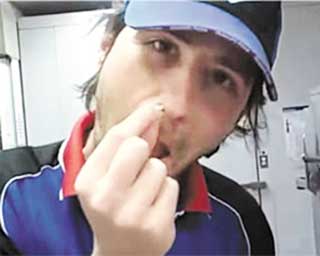 Footage of a prank video shows a Domino’s Pizza employee tainting the ingredients, which created an uproar online. Captured from YouTube

Misjudging the initial situation that has become known as “nut rage” worsened public sentiment, which led to a negative public image of the company and a larger crisis, according to Yoon.

Companies are working to better deal with threats to their reputations and risks that arise when the company loses customer trust because of a negative reputation.

Thanks to technology, news spreads with unprecedented speed, and one executive’s wrongdoing could ignite a rampant ruckus online via smartphones and social media.

“No matter how solid a company’s financial structure may be, it can be negatively affected by declining sales and brand image from a bad reputation or ethics scandal,” said Han Seung-beom, CEO of Maccine Korea, an online reputation management firm.

The problems don’t just stop with a tainted image. Customers may boycott products or services that could result in a decline in market share or even a deficit.

And problems can arise in unexpected areas. For instance, Daewoo International, a trading company, had been purchasing about 5 percent of Uzbekistan’s cotton production. When local and international human rights organizations questioned the treatment of child laborers, Daewoo International stopped its purchases even though it was not directly involved in the production process.

However, some incidents like the recent KAL scandal are not one-off events, but signs of structural problems. “Online reputation management can help ease negative public opinion, but it can’t resolve underlying issues by itself,” said Lee Jang-woo, chairman of the Korean Academic Society of Business Administration. “Reputation risk management is possible only after flawed corporate structures and internal cultures are fixed.”

Financial corporations that manage customer assets are built on trust and are especially vigilant for potential reputation risks. The Industrial Bank of Korea and Woori Bank have teams that deal with reputation risk.

Korean companies aren’t alone in their struggle with reputation risk.

America Online (AOL) CEO Tim Armstrong fired an employee during a conference call with 1,000 people. As the news spread via social media, Armstrong wrote an apology and apologized to the employee.

And it’s not only executives that can cause an uproar for companies. In December 2011, a FedEx deliveryman was caught by a security camera throwing a computer monitor box over a gate. The user said the monitor was broken, uploaded footage on YouTube and the video went viral, with more than a million views in three days. The senior vice president of FedEx Express U.S. operations apologized in a YouTube video.

In 2009, Domino’s Pizza employees uploaded a prank video in which they seemingly made a pizza with tainted ingredients and delivered it to a customer. Millions viewed the video and outraged people tweeted about it. Following the incident, Domino’s created a manual for employees and utilized a system that tracks online content related to the company.

“Unlike the past, when most things could remain hidden, there can be no secrets nowadays with mobile Internet and social media,” said Seo Young-jun, CEO of Plan J consulting company. “Transparent management and ethical management are no longer just rhetorical expressions, they are principles of corporate management.”

Companies that react well to reputation risk can even turn the situation to their advantage.

In 2007, global toy manufacturer Mattel saw sales plummet and stock value plunge after tests detected paint with lead on some of the company’s products. Over three recalls, Mattel collected its toys with lead paint.

CEO Robert Eckert said in a video apology: “As a parent of four children, I know that absolutely nothing is more important than the safety and well-being of children.” The adequate and apt response by Mattel helped the company’s fourth quarter net profit increase 15 percent year-on-year.

In Korea, Kolon Chairman Lee Woong-yeul received broad acknowledgement for his quick response after the gymnasium in Mauna Ocean Resort in Gyeongju collapsed in February. Lee stayed at the scene, taking the lead in handling the situation.

“There should be preparation and training for reputation risks, and when a crisis happens, there should be a quick and sincere apology,” said Chang Dong-han, a professor of Konkuk University. “Risk management is now a requirement for sustainable management.”
BY SON HAE-YONG, KIM YOUNG-MIN AND CHOI JOON-HO [eunjik@joongang.co.kr]