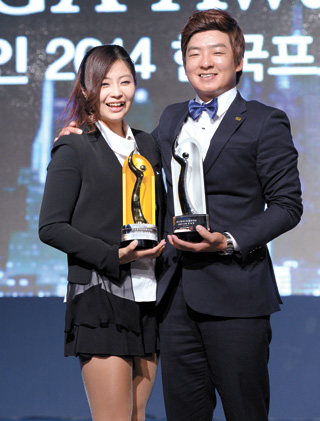 Professional golfer Kim Seung-hyuk has had the most successful year of his career in 2014, winning the grand prize and recognition as the leading money winner last week at the Korea Professional Golfers’ Association (KPGA) Awards at the Grand Hyatt Hotel in central Seoul.

Kim, who has spent nine mostly anonymous years in the KPGA, had a breakthrough year in 2014, winning two tournaments and the attention of fans.

Kim won his first title in May at the SK Telecom Open and then won the Kolon Korea Open in October. In the Shinhan Donghae Open, the final KPGA tournament of the year, he birdied the last hole to finish in a tie for fourth and ended the season with 3,363 points. “I didn’t even think of the grand prize, but an official from the association told me on the way back home [from the Shinhan Donghae Open] that I won,” Kim said. “I feel like I’m still dreaming.”

But what makes Kim stand out even more is his girlfriend, Yang Soo-jin, a KLPGA golfer and fashion designer who launched her own clothing brand this year in collaboration with her sponsor Pearly Gates. She takes care of Kim’s clothes, and “has a really good sense of style,” he said.

The couple began dating after they met at a training session in Vietnam in January, and this winter they will train in Thailand. “Last time, we joined the session from different teams,” Kim said, “but we are leaving together this time because Soo-jin decided to join my camp.”

While Kim has won two KLPGA tournament titles this year, Yang won none and finished 26th on the KLPGA money list. She won two tournaments in 2010, and one each in 2011 and 2012.

The two hope they will be stand on the podium together next year at the awards ceremony. “With the winter training session, I will definitely win the trophy next year,” Yang said. “The KLPGA has outstanding rookies every year, but I will never step back.”

Being a professional golf couple has its advantages. Kim gives technical advice most of the time, and Yang gives her boyfriend tips about the psychological side of the sport.

But they’re sometimes competitive as well.

“Since we are both professional golfers, we have a sense of peer pressure,” Kim said. “We make a bet when we play a round together, and we don’t give an inch. I win sometimes, and she wins other times, and the one who wins pays for dinner, anyway.”

As he won the grand prize this year, Kim has already set a goal for next year: topping the money list of the Japan Golf Tour.

“My putting is inconsistent and I need to make my tee shots about 10 yards longer because I need to hit 300 yards to become competitive in international tournaments,” said Kim. “I have achieved only 80 percent of what I want. I’ll just forget about my achievements this year and begin next season like a rookie.”