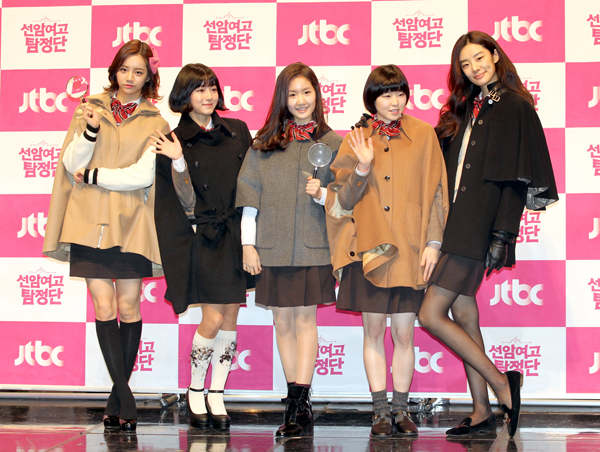 Five high school girls with unique personalities team up as amateur detectives to unravel the mysteries behind a series of scandalous events happening around their school. Along the way, they’re joined by a handsome teacher and two brilliant boys.

At first glance it seems like a lighthearted sitcom, but its aim is also to reflect many of the ongoing problematic issues in Korean schools these days, such as bullying, suicide and overly competitive studying environments.

“The initial slogan was ‘Adults! Write a letter of apology,’” said the show’s producer, Yeo Woon-hyuk, during a press conference last week.

A string of shameful incidents have occurred in schools these days, but the producer feels that the blame shouldn’t be wholly placed on the students, which is why he decided to adapt the novel “Seonam Girls High School Investigators” by Park Ha-ik into a TV production.

Star producer Yeo has made a name for himself in entertainment as the creator of popular talk shows including “Sseol Jeon” and “Gold Fish.”

“The overall ambience of the story is pretty serious. So I tried to gain laughs as much as possible,” said Yeo.

“The [drama] is fundamentally a black comedy, and I am sure that it will serve a certain role in society. It is my assignment to put it across in a funnier way.”

The producer’s optimistic way of thinking helped depict the serious issues in a more hopeful way.

“Of course, students who are going through those things are suffering. But I just wanted to tell them that it passes eventually. I wanted them to have hope,” said Yeo.

With Jin Ji-hee from “High Kick Through the Roof” in the title role, the drama includes some other up-and-coming faces, such as Hyeri from the girl group Girl’s Day and model-turned-actress Stephanie Lee.

“Actually, Hyeri was the first who was confirmed to be in the drama, but that was before she became a nationwide star. Now, she might think she is trapped in the drama,” laughed Yeo.

“I feel that there are parts where the newbie actors lack a little bit of acting skills, but they are learning and improving day by day.”

Hyeri, who plays Ye-hee, a girl who couldn’t be more confident about her appearance, said that the character is a perfect fit for her.

“This is my return to the acting scene after two years. I think this character fits me better than my previous one,” said the 20-year-old idol. “Ye-hee considers herself to be a beauty queen, but later she becomes sort of a subject of mockery among her friends.”

The drama airs once a week at 11 p.m. on Tuesdays, unlike regular shows in the same time slot that air twice a week. Yeo said this is because he wants to put more effort into each and every episode.