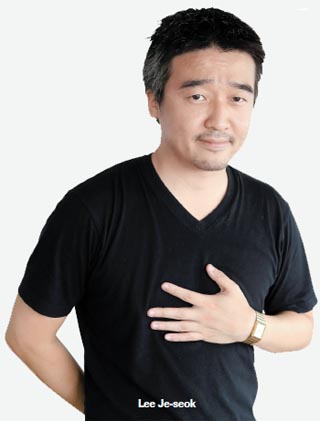 Among the fancy digital adverts that light up the streets, their shoddier paper counterparts are scattered around the sidewalks.

It may seem odd that leaflets still exist in our world, but it means they have survived because of their own set of merits.

Ad man Yi Je-seok, who is often dubbed an advertising genius, projected that the future for flyers is bright in a recent interview with the JoongAng Sunday, an affiliate of the Korea JoongAng Daily.

Yi won international fame when he nabbed the gold medal for one of his designs at “The One Show” in 2007.

“The One Show” is a prestigious award ceremony for design and advertising. It is held in New York.

After winning the competition, the 32-year-old started running his own design lab in Seoul in 2009 that mainly deals with work for public campaigns.

Q. What is the status of leaflets in a contemporary world?

A. The power and possibility of leaflets are in fact underestimated in today’s society. Ever since the era of papyrus, printed advertisements have existed. Leaflets are the advertising methods that get closest to the people, which bestows them with practical power.

What kind of change do you think is needed for leaflets?

They should be approached in diverse ways. If used well, paper ads can do something that no digital method can imitate.

For example, instead of just hanging up leaflets on a telephone pole, we could use characteristics such as the roundness of the pole.

Even if it is just a paper flyer, it is important to use the full potential of the space. We have to focus on creativity. Ads these days are too monotonous.

What’s the most impressive flyer you’ve ever seen?

I remember when an NGO printed messages about helping unfortunate neighbors on fallen leaves. It touched on people’s sentiments wisely. It’s important to have a story.

But don’t you think that paper advertisements are giving way to digital ones?

Mobile content is too massive and depends on devices instead of being independent like paper ads. Dependence on gadgets is one of its shortcomings. During World War II, propaganda bills were often referred to as a “gun without a bullet.”

Even if a war breaks out right now, people will use printed flyers. They have the advantage of being irreplaceable.

What do you think about the criticism that leaflets are causing a mess on the street?

What do you predict will happen to leaflet ads in the future?

In a world where everybody owns a smartphone, it is easy to think of paper ads as having no use. However, personally they are my favorite method of advertising.

Also, we still consider people who can play well with the paper ads as masters. In the end it all comes down to the matter of content, not the method.

Depending on the message, the venue and the way it is distributed, a shabby looking piece of paper can be transformed into a unique advertisement. Concerns like these will change the future for leaflets.