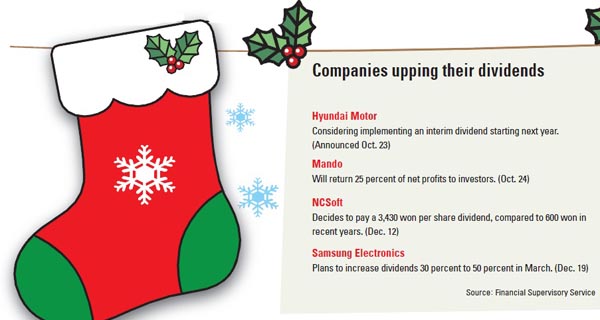 Forty-five minutes after the stock market closed on Dec. 19, Samsung Electronics released an announcement that the company is looking into increasing its dividends in March between 30 and 50 percent compared to this year.

The notification by the investor relations department said the main reason was the government campaign to get companies to cut back on their cash reserves to stimulate the domestic economy.

Although the company posted the filing after the market closed, the earlier rumors helped the company’s stock price increase nearly 5 percent compared to the previous day.

That was a surprising turnaround considering that the stock has been on a downhill slope since Dec. 10, particularly as foreign investors offloaded holdings.

It wasn’t just Samsung that was suffering from recent turmoil in global markets prompted by concerns about the Russian economy, fear of deflation and the weakening of yen, which led to foreign investors selling stocks.

Thanks to the boost from Samsung Electronics, which is the No. 1 company by market capitalization, the Kospi ended 1.71 percent higher on Dec. 19 than the previous day.

Korea dividend rate on its securities is one of the world’s lowest at south of 1 percent.

Dividend rates in advanced markets are between 2 to 3 percent.

Last year, Samsung Electronics paid out 2.16 trillion won in dividends to its investors. If it increases the payout between 30 percent and 50 percent, the company will pay between 2.81 trillion won and 3.24 trillion won.

Additionally, since Samsung Electronics last month announced it will buy back 2.19 trillion won worth of its own stock, the company is expected to spend 5 trillion won to improve the shareholders’ value this year, one of the goals of the government campaign. 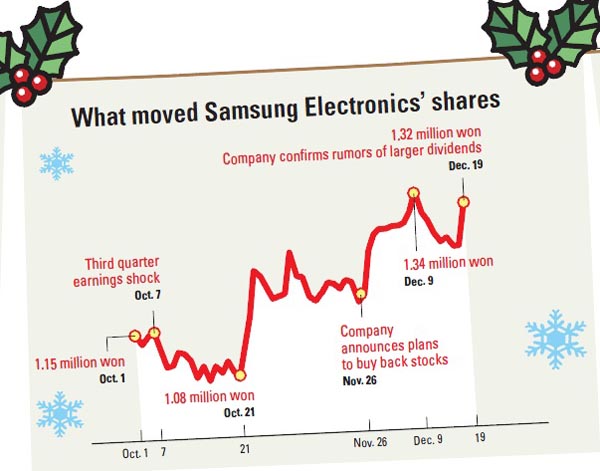 Hyundai Motor, the second largest company by capitalization, made a surprise announcement on Oct. 23 when announcing its third quarter results. President and CFO Lee Won-hee said the company was considering an interim dividend payment.

After the announcement, Hyundai Motor’s stock price spiked nearly 6 percent in a single day. The company’s stock at the time was down 26 percent compared to the beginning of the year because investors disapproved of the large price it paid for a plot of land from Korea Electric Power Corp. (Kepco) in Gangnam.

Other companies are following suit. On Oct. 24, automotive part manufacturer Mando announced that it will return 25 percent of its net profit to investors in dividends.

On Dec. 12, NcSoft said it set its dividend at 3,430 won per share. This was a significant increase from the 600 won per share over the last four years.

After the company made the announcement, its stock rose 6.5 percent.

To encourage small and midsize companies to pay better dividends, KB Financial Group Monday said it will step up its support for such companies. This includes 200 billion won worth of investments to companies that provide better dividends to investors, as well as reduced interest rates and larger loans.

Through its management research centers, KB Financial Group will provide information on such companies to attract larger retail investors.

“We hope that our active dividend payment program will help companies give investors more dividends and at the end contribute to revitalizing the domestic economy,” said Yoon Jong-kyu, KB Financial Group chairman.

Analysts say if more companies increase dividends, foreign investors will be more likely to keep their investments in the local market.

“Between Dec. 10 and Dec. 18, foreign investors have net sold 2.8 trillion won worth of shares,” said Kim Byung-yeon, a researcher at Woori Investment & Securities. “But starting Dec. 26, when companies will stop making changes on their shareholders rosters due to dividend payments, the foreign investors’ net selling will be reduced.”

Foreign investors have been requesting Korean companies to expand their dividend payments, and starting next year major players including the National Pension Service are expected to make a similar demand. 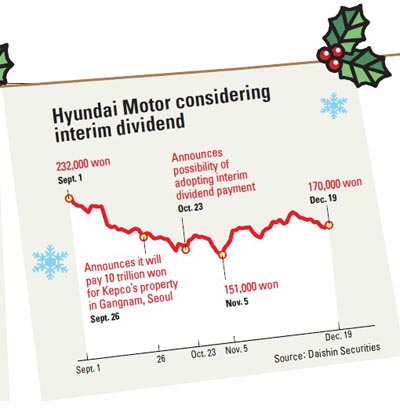 “As the pension fund and the government can make more aggressive demands, such changes will likely influence decisions by companies,” said Noh Aram, a KDB Daewoo Securities researcher.