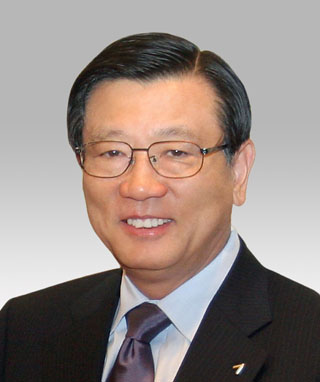 Kumho Asiana Group announced its motto for 2015 as the nation’s 17th-largest conglomerate tries to put years of debt restructuring behind it.

The group, which owns companies like Asiana Airlines and Kumho Tire, said Monday that its management mantra for 2015 is “Strengthen self without stopping.” The phrase comes from the ancient Chinese divination book “I Ching” (Book of Changes) and resembles the school motto of Tsinghua University in China.

The chaebol, which went into a liquidity crisis after it acquired Daewoo Engineering and Construction and Korea Express, had selected the motto “The second foundation” for this year.

“It’s time to refresh ourselves and strive toward the goal of becoming a beautiful company that can create No. 1 value in the industry,” said Kumho Asiana Group Chairman Park Sam-koo. “Let’s put our best efforts forward so that all employees and affiliates can be stronger on their own.”

Kumho Asiana has managed to turn around the financial health of its core affiliates.

It paid back its debts under the plan and is now able to get new financing on its own after its credit ratings improved.

The company had sales of 2.6 trillion won ($2.3 billion) and an operating profit of 276.2 billion won through September. It also saw its credit rating rise from BBB- to BBB. Its debt-to-equity ratio was 149 percent in the third quarter, which was 51 percentage points below its target figure for ending the debt workout program.