NPAD distances itself from UPP after court ruling

NPAD distances itself from UPP after court ruling 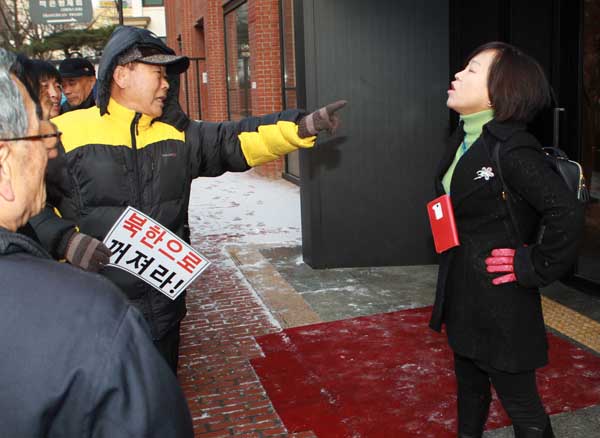 A supporter of the now-disbanded Unified Progressive Party, right, argues with a member of a conservative civic group holding a placard that reads, “Just go back to North Korea,” at the Franciscan Education Center in Jung District, central Seoul, Monday. By Oh Jong-taek

The opposition New Politics Alliance for Democracy (NPAD) continued to criticize the Constitutional Court’s ruling Friday dissolving the Unified Progressive Party (UPP), but analysts found the criticism weaker than expected after a generally positive public acceptance of the judgment.

During a leadership meeting Monday at the National Assembly, NPAD interim leader Moon Hee-sang said he was gravely worried about the “breach of a political party’s freedom,” which he said was “a fundamental column of democracy.”

But the five-term lawmaker also said he respected the court’s decision, which he called “irreversible.”

Opposition floor leader Woo Yoon-keun also criticized the Friday ruling, asking whether the nine-judge panel of the Constitutional Court truly reflected the values and spirit of diversity required by a democracy in the 21st century. The three-term lawmaker said there is an inherent restraint in selecting Constitutional Court judges who represent the entire ideological spectrum of the country under the current nomination system. He was clearly referring to the eight-to-one vote for the ruling.

However, Woo made it clear he doesn’t support any of the policies supported by the disbanded party. “I absolutely do not agree with the UPP’s activities, especially its North Korea policy,” he said.

Though party leader Moon expressed his objection to the UPP’s disbanding because of the constitutionally guaranteed rights of freedom of expression and association, he and other prominent opposition lawmakers appeared to be toning down their criticisms, especially following a public opinion poll that showed six out of 10 people agreed with the UPP’s dissolution.

According to the poll by the JoongAng Ilbo of 1,000 adults conducted on Friday and Saturday, 63.8 percent of the people said they support the decision, while 23.7 percent said they disagree. The rest said they did not have an answer or did not respond.

“The UPP itself was not influential enough to earn public backing for its protest against the disbandment,” Kang said. “And when it comes to North Korea policy, Korean society tends to be conservative [which works against the UPP].”