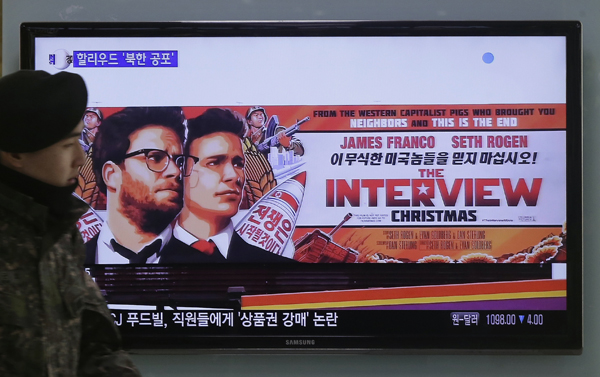 A soldier in the South Korean Army walks near a TV screen showing an advertisement for Sony Pictures’ “The Interview” at the Seoul Railway Station in Seoul, Monday. [AP/NEWSIS]

U.S. President Barack Obama says the United States is reviewing whether to put North Korea back on its list of state sponsors of terrorism as Washington decides how to respond to what he calls an “act of cybervandalism,” not one of war, against a movie company.

North Korea has reacted angrily to Obama’s comments blaming it for the hacking of Sony, warning of strikes against the White House, Pentagon and “the whole U.S. mainland, that cesspool of terrorism.”

Such rhetoric is routine from North Korea’s propaganda machine. But the long statement from the powerful National Defense Commission late Sunday also underscored Pyongyang’s sensitivity about a movie with a plot focused on the assassination of its leader Kim Jong-un.

Sony Pictures Entertainment, which said it canceled the theatrical release of “The Interview” after distributors refused to show it, pledged to find a way to get the film out. “How it’s going to be distributed, I don’t think anybody knows quite yet,’’ a Sony lawyer said.

Obama is promising to respond “proportionately” to an attack that law enforcement blames on North Korea. “We’re not going to be intimidated by some cyberhackers,” he said.

The president said the United States would examine the facts to determine whether North Korea should land back on the terrorism sponsors list.

“We’re going to review those through a process that’s already in place,” Obama told CNN in an interview broadcast Sunday. “I’ll wait to review what the findings are.”

The National Defense Commission, led by Kim, warned that its 1.2-million-member army is ready to wage all types of warfare against the United States.

“Our toughest counteraction will be boldly taken against the White House, the Pentagon and the whole U.S. mainland, the cesspool of terrorism, by far surpassing the ‘symmetric counteraction’ declared by Obama,” said the commission’s Policy Department in a statement carried by the official Korean Central News Agency.

Obama’s description drew immediate scorn from two Republicans who are longtime critics of his foreign policy.

Sen. Lindsey Graham of South Carolina called it “an act of terrorism” and favored reimposing sanctions and adding North Korea to the terrorism list. The United States needs to “make is so hard on the North Koreans that they don’t want to do this in the future,” Graham said.

North Korea spent two decades on the list until the Bush administration removed it in 2008 during nuclear negotiations. Only Iran, Sudan, Syria and Cuba remain on the list, which triggers sanctions that limit U.S. aid, defense exports and certain financial transactions.

But adding North Korea back could be difficult. To meet the criteria, the State Department must determine that a country has repeatedly supported acts of international terrorism, a definition that traditionally has referred to violent, physical attacks rather than hacking.

The United States is asking China for help as it considers how to respond to the hack. A senior Obama administration official says the United States and China have shared information about the attack and that Washington has asked for Beijing’s cooperation.

China wields considerable leverage over North Korea, but Obama has accused China of carrying out cyberthefts, too.

In the CNN interview, taped Friday in Washington before Obama left to vacation in Hawaii, Obama renewed his criticism of Sony’s decision to shelve “The Interview,” despite the company’s insistence that its hand was forced after movie theaters refused to show it.

Obama suggested he might have been able to help address the problem if given the chance. “You know, had they talked to me directly about this decision, I might have called the movie theater chains and distributors and asked them what that story was,” he said.

Sony’s CEO has disputed that the company never reached out, saying he spoke to a senior White House adviser about the situation before Sony announced the decision. White House officials said Sony did discuss cybersecurity with the federal government, but that the White House was never consulted on the decision not to distribute the film.

“Sometimes this is a matter of setting a tone and being very clear that we’re not going to be intimidated by some, you know, cyberhackers,” Obama said. “And I expect all of us to remember that and operate on that basis going forward.”

David Boies, a Sony lawyer, said “The Interview” is “going to be distributed, and what Sony has been trying to do is to get the picture out to the public,” while protecting the rights of company employers and moviegoers.

Boies said theaters “quite understandably” decided not to show the film as scheduled because of the threats. “You can’t release a movie unless you have a distribution channel,” he said.

North Korea has denied hacking the studio and on Saturday proposed a joint investigation with the United States to determine the true culprit. The White House rejected the idea and said it was confident North Korea was responsible.

But the next decision - how to respond - is hanging over the president as he vacations with his family in Hawaii.

Obama’s options are limited. The United States already has trade penalties in place and there is no appetite for military action.

Boies appeared on NBC’s “Meet the Press,” Graham was on CBS’ “Face the Nation” and McCain spoke on CNN.