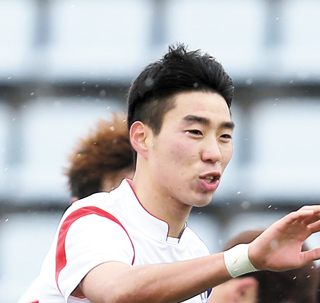 Choosing goal-scorers for the national team’s Asian Cup lineup was a major concern for Manager Uli Stielike, and the one who drew the most attention on the final roster announced Monday was Lee Jung-hyeob.

Lee, of the military football team Sangju Sangmu FC, is the only striker out of the five who attended a training session this month in Jeju who made it onto the Asian Cup squad. Because Lee made the cut, Park Chu-young of Al Shabab was left off the roster.

Lee, who was taking a day off at home on Monday, said he was “surprised” by the announcement.

Ahead of the weeklong training session, which ended Sunday, Stielike said he needed “hungry players with enthusiasm,” and Lee proved he was one of them.

The 23-year-old made his professional debut with the K-League’s Busan I’Park last year, but he spent a lot of time on the bench. He appeared in 27 matches with two goals and two assists, but he played full time in only four.

Lee decided that staying with the team was not in his best interests, so he joined the Korea Armed Forces Athletic Corps instead.

Stielike has had his eye on Lee Jung-hyeob since the semifinal of the FA Cup between the Sangju Sangmu and FC Seoul on Oct. 22. Lee did not play for long that day, but the German manager was impressed by his selflessness.

Stielike said after the game, “Lee Jung-hyeob’s play was interesting even though he only appeared for a limited time.”

Manager Yoon Sung-hyo of Busan I’Park, who has known Lee for several years, praised his skills.

“I wanted to train Lee from when he was younger … he often takes part in defense and runs relentlessly throughout the match,” Yoon said.

“He is like an unripe fruit, but he will prevail once he gains some experience.”

Stielike, who has led the Taegeuk Warriors since September, is facing the same striker shortage as his predecessor. With his top two options, Lee Dong-gook and Kim Shin-wook, out due to injuries, and Park Chu-young underperforming at his club, the manager struggled to find a replacement.

Lee suddenly became a promising option by proving himself during training. He said he just wanted to enjoy practice, but also showed his competitive side, partly because Assistant Coach Park Kun-ha advised him to be more selfish in front of the goal.

“Playing a supportive role in the game was more comfortable for me,” Lee said during training. “But now I want to score goals when I get shooting chances.”

Lee finally impressed Stielike in a scrimmage on Sunday, the last day of training. He netted the ball with a header in the 19th minute, and he showed off threatening moves throughout the match.

While announcing the roster, Stielike cited the Korea Football Association’s slogan “Time for change” as his reason for choosing Lee over the other strikers.

“It would have been easier to pick Park Chu-young, but the team needs to change now,” said the 60-year-old manager. “I selected Lee because I though we needed a classic target man that is different from our existing strikers.”

The national team leaves for Australia, where the Asian Cup will be held, on Saturday.

“I want to salute the nation just like Lee Keun-ho did after scoring a goal in the World Cup this year,” Lee said. “I will also do my best as a soldier to enhance national prestige.”