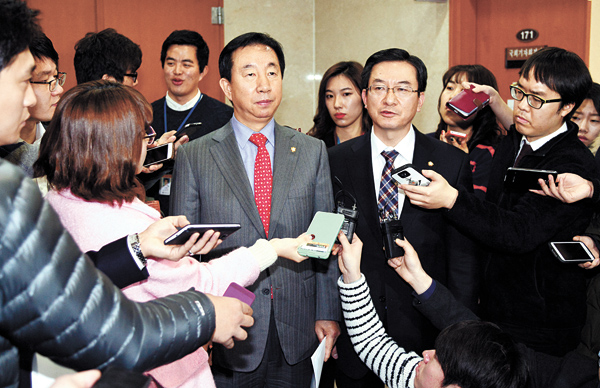 Kim Sung-tae, lawmaker of the Saenuri Party, and Jung Sung-ho, lawmaker of the New Political Alliance for Democracy, answer questions at the National Assembly in Yeouido, southwestern Seoul, on Tuesday after the two parties agreed to revise legislation on real estate. [NEWSIS]

The ruling and opposition parties reached an agreement Tuesday to revise three major real estate regulations to perk up the property market.

The first regulation to be revised is a ceiling on the presale prices on privately owned housing sites instituted in 2005 by the Roh Moo-hyun administration to cool the overheated property sector. The presale price has to be lower than the government assessed value of the property where the apartment is to be built plus the construction costs, as well as the profits to be made by the property development company.

Abolishing the price limits could lead to too much speculative investment, while a tight limit could deter investors. The two sides agreed on a flexible ceiling.

The two parties also agreed to postpone the implementation of the mandatory surrender of excess profits made when a site is redeveloped. The system is in effect now. But it will be suspended for the next three years.

The government can demand up to 50 percent of the profit made from a rise in the value of a property after it’s redeveloped. For example, if a redeveloped apartment unit sees its value go up 300 million won ($272,099) - even just on paper - the government can ask up to 150 million won. The two parties agreed to postpone the system until 2017.

Another regulation that will be changed was a prohibition on home owners in redevelopment projects from owning more than one unit in the newly developed estate in the greater Seoul area. Now they will be allowed to own a maximum of three units in the estate.

“There are some who believe that the easing of regulations on redevelopments will only benefit people who own properties in the three major districts of Gangnam - Gangnam, Seocho and Songpa - but this is not true,” said Saenuri lawmaker Kim Sung-tae.

“The agreement will help bring interest in the overall redevelopment market.”

Both parties and their floor leaders agreed to pass the revisions within this year after bills pass the legislation and judiciary committee.

The two parties also agreed to work on housing stability especially for people in middle and lower income households. That includes the establishment of a committee that will focus on settling disputes between tenants and landowners.

The two parties agreed to revise related legislation during an interim session in February for the establishment of the committee.