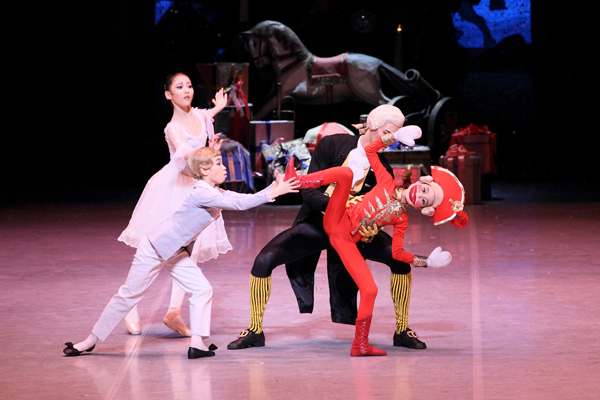 Two of Korea’s major ballet companies are presenting “The Nutcracker” for families to enjoy this Christmas season. See THEATER, below. Provided by KNB

LEE SEUNG-CHUL CONCERT
COEX, Hall D
Wednesday to Friday: One of Korea’s top singers, Lee Seung-chul, will return to celebrate Christmas with the concert “Ultra Cap Song.” The singer’s agency has said that the show will be rather exciting as Lee has asked the audience to join in.
The concerts start at 8 p.m.
Tickets range from 77,000 won to 154,000 won ($70 to $139).
Samseong Station, line No. 2, exit 5.

KIM YEON-WOO
2014 CHRISTMAS CONCERT
Olympic Hall, Olympic Park
Wednesday to Saturday: Kim Yeon-woo, who is known for his appearance on MBC’s hit program “Survival: I Am a Singer,” is planning to hold a Christmas concert. Kim is ready to appeal to the sensitive side of his fans with songs describing love stories that are doomed or have ended badly. His agency said he will release a new mini-album before the concert on Dec. 27.
Tickets range from 99,000 won to 143,000 won.
Olympic Park Station, line No. 5, exit 3.

MEMORIES 2014
Sejong Center for the Performing Arts
Dec. 30: The Sejong Center will be holding a winter-themed concert with one of the best-known sopranos, Sumi Jo. She’ll be joined with special guests and an orchestra.
The concert starts at 8 p.m.
Tickets range from 40,000 won to 130,000 won.
Gwanghwamun Station, line No. 5, exit 1 or 8.

KIM BUM-SOO GET ALRIGHT SHOW: BEFORE & AFTER
Korea University, Hwajung Gymnasium
Dec. 30 and 31: After the success of Kim Bum-soo’s “2014 Kim Bum-soo Get Alright Show,” the singer plans to celebrate New Year with an encore concert.
“With his excellent vocal sounds, he is putting in extra effort to ensure that the audience is relieved of stress,” his agency said.
Tickets range from 88,000 won to 121,000 won.
Anam Station, line No. 6, exit 2.

2014 YEAR-END CONCERT -
JUNG-IN, LEESSANG, HAHA & SKULL
SK Handball Stadium, Olympic Park
Dec. 30 and 31: Music icons Jung-in, Leessang, Haha and Skull are gathering together to wrap up the year with a concert under the theme “Union X.”
The show will be a collaboration among the four musicians. The program’s promoter, CJ E&M, said, “The theme of ‘Union X’ entails two meanings: ‘Union’ means not only for the singers, but also the union with the audience.”
This will be the first performance of Gil Sung-joon, aka Gil of veteran hip-hop duo Leessang, since taking an eight-month hiatus from the music scene.
Tickets range from 110,000 won to 121,000 won.
Olympic Park Station, line No. 5, exit 3.

THE HOME
Egg and Nuclear Theater
Jan. 16 to Feb. 14: Singer Lee Ji-hyeong will hold a concert where he will invite guest artists, one of which will be randomly picked from a selection of 24 musicians, including renowned singer-songwriter Lee Juck and actress Yoo In-na.
The concert begins at 8 p.m. on weekdays, at 6 p.m. on Saturday and 5 p.m. on Sunday. There is no performance on Monday.
Tickets are 40,000 won.
Hyehwa Station, line No. 4, exit 2. 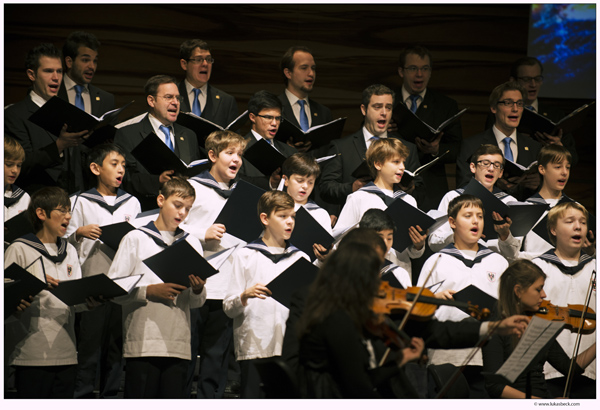 Jan. 25: The Vienna Boys Choir, one of the most popular boys’ choirs in the world, is returning to Seoul to celebrate the New Year. The choir is more than 520 years old and has about 100 singers who are all between the ages of 10 and 14. Despite its long history, the choir plays pop songs, including tunes by The Beatles and Madonna, as well as classical music.
The concert begins at 5 p.m.
Tickets range from 30,000 won to 10,000 won.
Nambu Terminal Station, line No. 3, exit 5.

THE NUTCRACKER
Korean National Ballet; Seoul Arts Center
To Sunday:
Universal Ballet: Universal Arts Center
To Dec. 31: Korea’s two major ballet companies are staging two versions of “The Nutcracker,” the traditional Christmas performance. Along with “Swan Lake” and “Sleeping Beauty,” “The Nutcracker” is one of three ballets composed by Tchaikovsky.
This time, the Korean National Ballet presents its version adapted from the ballet choreographed by Yuri Grigorovich, the art director of Moscow’s Bolshoi Theater from 1964 to 1995.
The performance starts weekdays at 7:30 p.m. and at 2 p.m. and 6 p.m. on weekends.
Tickets range from 5,000 won to 90,000 won.
Nambu Bus Terminal Station, line No. 3, exit 5.
More than 700,000 people have watched the Universal Ballet Company’s version of “The Nutcracker” since it was first staged.
The performance starts on weekdays at 4 p.m. and 8 p.m.; Saturdays at 3 p.m. and 7 p.m.; and Sundays at 2 p.m. and 6 p.m. There are no shows on Mondays.
Tickets range from 10,000 won to 100,000 won.

LA CAGE AUX FOLLES
LG Arts Center
To Mar. 8: The Tony Award-winning play is returning with a stunning cast that includes renowned singer Lee Ji-hoon.
The show unfolds in Paris when Jean-Michel, the son of a gay couple called Georges and Albin, is trying to marry Anne, the daughter of an extreme conservative.
The performances are at 8 p.m. from Tuesday to Thursday; 3 p.m. and 7:30 p.m. on Saturday; and 2 p.m. and 6:30 p.m. on Sunday. There are no performances on Mondays.
Tickets range from 60,000 to 130,000 won.
Yeoksam Station, line No.2, exit 7. 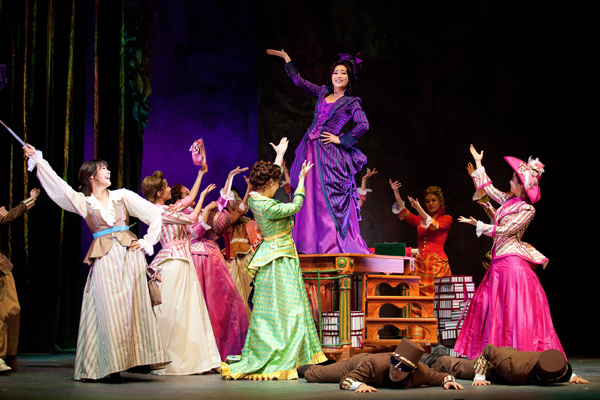 Thursday to Dec. 30: La Scala’s original Italian version of “Aida” will be performed in Seoul to commemorate the 130th anniversary of ties between Korea and Italy.
The show tells the story of Aida, Nubia’s princess, who is enslaved in Egypt, and it vividly describes the tragic love story between her and Radames.
Lila De Nobili, a fashion designer who has worked with Hermes and Lancome, created the outfits.
The performance starts at 7:30 p.m. on Dec. 25 to 28; at 1 p.m. and 7 p.m. on Dec. 29; and at 5 p.m. on Dec. 30.
Tickets range from 77,000 won to 330,000 won.
Nambu Bus Terminal Station, line No. 3, exit 5.

MR. SHOW
Lotte Card Art Center
To Jan. 31: Presented as a pure sexual fantasy for women, “Mr. Show” is a performance by eight handsome men under the direction of Kolleen Park. In this R-rated show, which is off-limits to men, the performers are clothed in various outfits - from dress suits to underwear.
The organizing agency behind the performance said it planned to produce “Mr. Show” because today’s Korean women need a place to release their stress.
Tickets range from 60,000 won to 80,000 won.
Hapjeong Station, lines No. 2 and 6, the passageway between exits 8 and 9.

KINKY BOOTS
Chungmu Art Hall
To Feb. 22: Top-ranking Broadway musical “Kinky Boots” is coming to Korea for the first time. The performance received six Tony Awards in 2013 and won a Grammy for best musical album in 2014. The show is based on the true story of Charlie, who took over a failing shoe-making company owned by his parents. He hopes to make it a success again by creating high heels for men.
Pop diva Cyndi Lauper wrote and composed the songs for the musical, which will be reinterpreted in Seoul by Korean performers.
Tickets range from 50,000 won to 140,000 won.
Sindang Station, lines Nos. 2 and 6, exits 1 or 9.

ONCE
Seoul Arts Center, CJ Towol Theater
To March 29: The public is already familiar with the movie “Once,” which tells the tale of a Czech immigrant who falls in love with a street performer. The Seoul Arts Center is now presenting the same storyline but as a musical.
The movie has attracted an audience of more than 200,000 and it became an unprecedented box-office hit as an independent film.
The show starts at 8 p.m. Tuesday through Friday; 3 p.m. and 7:30 p.m. on Saturday; and 2 p.m. and 6:30 p.m. on Sunday.
Tickets range from 60,000 won to 120,000 won.
Nambu Bus Terminal Station, line No. 3, exit 5.