A growing taste for quality coffee

A growing taste for quality coffee 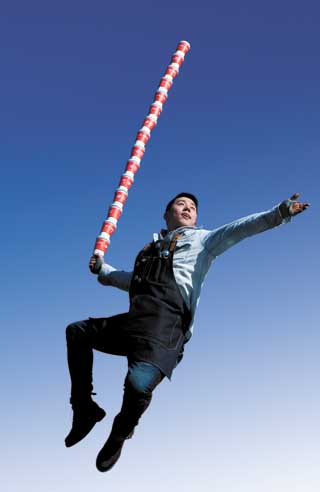 Lee Dong-jae, a former stage and musical actor who now owns Roasters Lab, dances with a stack of coffee cups. By Kwon Hyuk-jae

During the business trip, he talks directly with farmers and makes a deal to buy beans only after carefully observing how the farm operates.

His coffee shop, Coffee Libre, distinguishes itself from mainstream coffee chains by serving specialty coffee, and his business has been successful because Korean coffee drinkers are looking for distinct and rich tastes amid the ubiquitous presence of franchises that serve bland coffee.

To be categorized as specialty coffee, the coffee must score at least 80 points on a 100-point scale created by the Specialty Coffee Association of America (SCAA).

But the term is often used to describe any coffee roasted with quality beans.

Thanks to the popularity specialty coffee, Seu now has four shops.

The owner said that the best coffee comes from great farms.

“I believe that coffee is also a type of food,” he said.

“So, in the same way that a cook takes great care of his ingredients to make a great dish, I also need to pay attention to the farms where coffee is produced.”

The growing desire for specialty coffee has led to a wave of small, independent shops like Seu’s opening up across the country.

Lee Dong-jae used to be a stage actor, but now he is trying his hand at running a cafe.

Lee said that he decided to open a coffee shop in the business area to bring an artsy and laid-back atmosphere to the neighborhood.

Some say that Korea has entered the third wave of its coffee era. Now, coffee is treated like an artisanal product rather than a commodity. Consumers are concerned with the quality of ingredients and want to know where the beans come from and how they were roasted.

The first wave was made up of mass-produced instant coffee, while the second was quality coffee produced by chains like Starbucks.

But even Starbucks, the world’s largest purveyor of coffee, now gravitates toward specialty coffee.

The company also recently announced that it will open at least 100 Starbucks Reserve cafes in the next five years.

Packages of the Reserve brand coffee are already for sale at Starbucks shops in Korea.

Starbucks Korea said that the Reserve blend has been well received by Koreans.

“Since it was introduced in March, sales of Reserve coffee increased by 20 percent in October compared to the first month,” said Song Hye-gyung, head of the communications team.

The shift toward better-quality coffee is due to growth in the coffee market.

Last year, the Ministry of Health and Welfare found that Koreans drink coffee more often than they eat rice or kimchi. It said that in one week, a person consumes coffee an average of 12.3 times, rice seven times and kimchi 11.8 times.

According to the Korea Customs Service last year, based on the amount of coffee imported, the average adult drank 298 cups of coffee, an increase of 3.8 percent from the previous year, when adults consumed 288 cups each.

The constantly growing demand has led to a big jump in imports of coffee beans. The customs office reported yesterday that 120,000 tons of coffee was imported last year, a 4 percent increase from the previous year, with 115,000 tons.

Even though coffee shops are ubiquitous, consumers seem to be bored with traditional-tasting coffee.

“Coffee made by big coffee chains taste the same as each other,” said Kim Tae-jeong, a barista and coffee specialist who runs a research group on coffee. “Specialty coffee is not produced as quickly and is more expensive, but when people feel it is worth the price, it is a genuine specialty coffee.”

But some cafe owners said they were concerned by the latest craze.

“There are organizations in each country that give certificates for specialty coffee,” said a 30-year-old man who is preparing to open a coffee shop.

“But it will cost about 3 million to 4 million won to undergo the process required to earn that certificate. The problem is that there are no clearly stated standards of what constitutes ‘specialty’ and the criteria is vague.”

Other coffee lovers were also skeptical of the fad.

“It would be misleading to think that the taste of coffee is the sole factor in making a successful coffee shop,” said Jeon Gi-hong, author of the book “A Coffee Shop That Runs Well.”

“So, jumping on the specialty bandwagon is a little risky. Popular coffee shops also must cater to those who are not aficionados of coffee.”