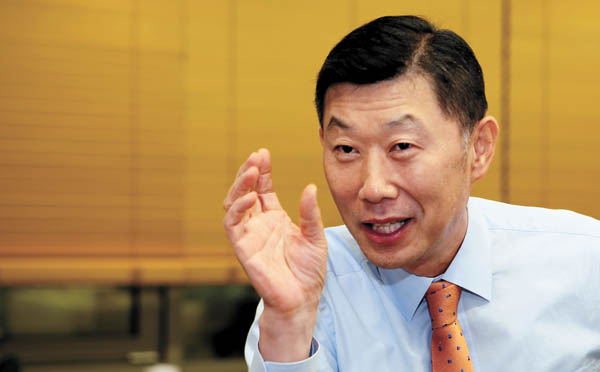 But Kim, who heads Korea’s largest poultry producer, was previously best known for starting out some 47 years ago as an 11-year-old boy raising 10 chicks, going on to build a chicken empire with yearly sales of 4 trillion won.

He likes to quote the paradoxical title of the book “Do What You Love, The Money Will Follow.”

Kim successfully bid on the French emperor’s hat made of black felt and beaver fur at an auction at the Chateau de Fontainebleau, near Paris, historically significant as the location where Napoleon abdicated in 1814. The black two-pointed hat put up for sale by the Grimaldis, Monaco’s royal family, was apparently worn by Napoleon at the Battle of Marengo in Italy in 1800 against the Austrians, before he declared himself emperor in 1804.

It is one of the emperor’s 19 remaining bicorn hats out of an estimated 120 that he wore in his lifetime.

Napoleon’s chief veterinarian received the hat as a gift before it went into the hands of Prince of Monaco Louis II in 1926, so its authenticity was not in question.

“While 2.6 billion won might seem like a large sum of money, it’s cheap compared to the value imbued in the hat,” Kim told the JoongAng Sunday last week.

But rather than keeping the hat for himself, Kim said after the auction that he was considering displaying it where other people could share Napoleon’s spirit of taking on challenges.

Q. Do you agree that everybody needs self-definition at one point?

A. I think I could always be described as a person who departs from my safety zone. I do not dwell on the familiar present and always embark on a challenging adventure heading toward the future.

Can you give any examples?

When I said that I will expand my chicken-processing factory tenfold, my employees told me, “Things are fine right now. This can go very wrong. We can go bankrupt.”

But in expanding its scale, production costs dropped and product quality increased. As the scale of the factory increased, we needed a factory for [poultry] feed, so we entered the feed market. Harim is known for its chicken, but annual poultry-related sales are 1.1 trillion won, while feed-related sales are 1.4 trillion won. And as we entered the feed industry, we considered the necessity of specializing in producing grains as well.

When things go well, don’t competitors try to get in the business, too?

That doesn’t matter. The world is fundamentally about competition. Through competition, innovation emerges and progresses. It seems nice to have some sort of guarantee, but through guarantees and protection, innovation and competitiveness disappears. When your child is young, you have to piggyback him. If you continue to carry him when he is of the age to walk just because you love him, he won’t be able to walk by himself even when he reaches retirement.

What is the key factor that ultimately separates success and failure in such a competition?

In my case, I selected the right career. Raising chickens suited my hobbies and aptitudes well. If you work according to your aptitude, you develop creativity. That’s because you research. If you take an IQ test in a field in which you know the answers, your IQ level would be over 150 - a genius. In the area in which I have an aptitude, I, too, am a genius - because it’s fun. Even when I’m working, I don’t get sick of it or tired. It’s like you’re playing, not working, so you can’t help but be good at it.

But even if you have aptitude, anyone can fall into a state of crisis.

My parents always disregarded my talents, telling me, “What are you going to do when you grow up?”

That was a sort of a crisis. When I was in my third year of middle school, I was the class president and studying was quite fun, but I wanted to transfer to an agricultural high school. [My parents] wouldn’t let me, so I ran away from home and took a year off.

After I went to an agricultural high school, everything became bigger. I officially registered for a business license in my senior year of high school. I went completely bankrupt once in my early 20s. Chicken and pork prices soared, and I was chased by debt collectors. When I went to the supermarket, pork prices had sky-rocketed but sausage prices remained the same. So I entered the food-processing industry. That’s how this three-part management system of breeding, processing and distribution became integrated.

As an entrepreneur, what defines happiness and merit for you?

When what you conceptualize becomes reality, when something you attempted is achieved - that is when I feel happiness. Last year, we paid 60 billion won in corporate taxes. We have 8,000 employees in Korea and 2,500 abroad. I feel merit in paying taxes to my country and increasing the number of jobs. Earning money is secondary. We are a leading company in this area and being a top-ranked company is difficult. You have to play the role of the protector as well. While it is difficult, you also feel great merit.

What sort of significance does Napoleon’s hat have for you?

When Napoleon crossed the Alps, his source of food was chickens and eggs. The Gallic rooster, shaped like a hat, is a symbol of France. So we have that bond. I first heard the news that Napoleon’s hat was coming up for auction a week before on the radio in the car. The moment I heard the news, I had this simple thought: “Oh, I need to buy that.”

I wanted to buy the hat and continuously face challenges and improve. I also thought it would be good for society. In a society where the will to take on challenges is disappearing because of a mafia-like sharing scheme and regulations, I see that an icon like Napoleon, who was willing to take on challenges, is urgently needed. The international media focused on the fact that a Korean businessman bought Napoleon’s hat. Our company has business in six countries, but our status has increased a bit. I plan to display the hat in our new company building. I believe it will be a contribution that cannot be exchanged with any amount of money if students can come and dream bigger after seeing it.