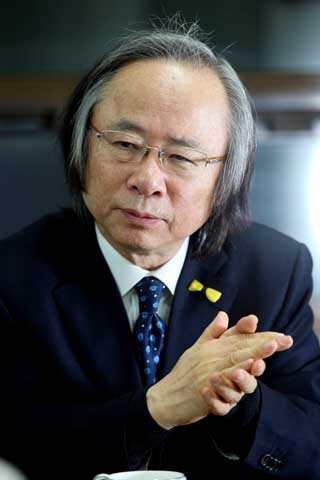 President Park Geun-hye said on Tuesday that Minister of Oceans and Fisheries Lee Ju-young had stepped down, an announcement that raised the prospects for a reshuffle as she enters her third year in office.

“Maritime Minister Lee Ju-young will be withdrawing from his post after attending today’s cabinet meeting,” the president said during the cabinet meeting over which she presided at the Sejong Government Complex.

The minister, responsible for overseeing the response following the April 16 Sewol ferry disaster, had indicated his intention to resign several times before.

“The bereaved families and people have been immensely moved by him devoting himself to resolving the accident during his 136-day stay at the scene, especially since the ministry was under the biggest difficulty,” she said. “I think he embodied the true image of a public servant, who is supposed to volunteer for the people. I hope he plays an even bigger role for the country in whatever post he will be assigned in the future.”

Lee, a former judge, lawyer and lawmaker, is expected to vie for floor leader within the ruling Saenuri Party. He was inaugurated as the minister of oceans and fisheries on March 6, and shortly after faced the grave responsibility of spearheading operations to handle the aftermath of the accident.

Lee previously stated he would step down as soon as those efforts were finalized, though his term was extended on Nov. 18, overturning predictions that he would be replaced following a major Blue House reshuffle.

At the time, President Park nominated the former deputy chief of the Joint Chiefs of Staff and a former human resources expert at Samsung Electronics to head the two new organizations established for disaster control. The Ministry of Public Safety and Security and the Ministry of Personnel Management were subsequently created as a follow-up measure to Korea’s worst maritime disaster.

But talk of a reshuffle has emerged again in recent weeks, with the Park administration in dire need of an overhaul. The president’s approval ratings fell to an all-time low of 37 percent last week in the aftermath of a political scandal sparked by a leaked internal Blue House report.

A local daily, quoting the document, reported on Nov. 28 that the president’s former aide, Chung Yoon-hoi, has continued to wield considerable influence, discussing state affairs and human resources matters with a tight 10-member circle that includes three of the president’s secretaries.

Presidential spokesman Min Kyung-wook hinted at a government shake-up during a briefing with reporters last Thursday, saying the Blue House was “closely monitoring various measures and opinions on a reshuffle proposed by the media.”

During the meeting on Tuesday with ministers, the president also urged related officials to boost cybersecurity around the country’s nuclear reactors and other key facilities, following a series of data leaks that disclosed information about the reactors at the Gori and Wolsong Nuclear Power Plants.