Losses stacking up for Thunders

Losses stacking up for Thunders 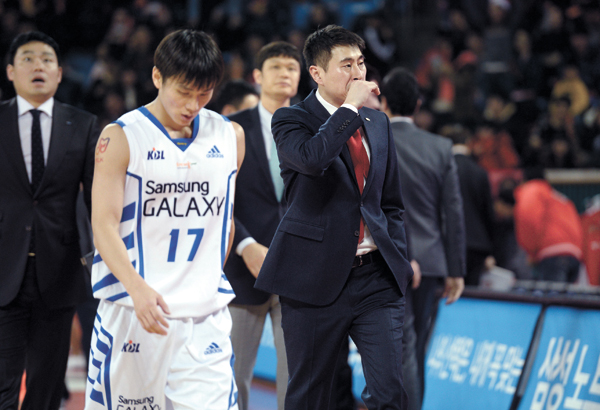 Manager Lee Sang-min of the Seoul Samsung Thunders leaves Jamsil Students’ Stadium on Thursday after the team lost 70-56 to the Seoul SK Knights. The Thunders extended their away-game losing streak to 10. [NEWSIS]

Lee Sang-min, who used to be a superstar in college basketball and the professional league, has hit what seems to be a low point in his career after his first year managing the Seoul Samsung Thunders.

Samsung posted its 10th consecutive loss in away games as it trailed behind the Seoul SK Knights 70-56 Thursday.

The team couldn’t recover from its biggest loss on Tuesday, when the Thunders were defeated by Incheon ET Land Elephants by the biggest margin ever recorded in the league, 100-46. The Jeonju KCC Egis previously held the record after losing 101-58 to Ulsan Mobis Phoebus in October last year.

This year, Seoul Samsung is going 7-24 and has suffered nine consecutive losses after a run of six consecutive losses earlier in the season. The KBL has just entered the second half of the regular season, but the Thunders are stuck at the bottom of the rankings and the possibility that they will make the playoffs is looking very slim.

When the team set the worst record on Tuesday, Samsung had 18 errors and their 2-point field goal percentage was at 29 percent (11/38), while ET Land’s was at 68 percent (27/39). Lee shouted at the players during a time out in the third quarter, when Samsung was trailing 52-28, but it had little effect.

“I won’t let this happen again,” Lee said after Tuesday’s game. “I’ve spent many years in basketball, but I never had such a bad game. I’m more worried about the players.”

Injuries also played a part. Keith Clanton and Park Jae-hyun recently came back to the team, but Lim Dong-seob and Kim Dong-woo are still on the bench.

As a result, the team is depending heavily on two players who are only in their first season with the team - Leo Lyons, who has sunk an average of 20.63 points per game, and Kim Jun-il, with 13.33 points per game.

But this season, luck is also not on Samsung’s side. On Nov. 6, Wonju Dongbu Promy beat the Thunders 60-58, cutting off Samsung’s winning streak at three. The Thunders failed to get a third consecutive win again on Sunday, losing to Promy 76-75 at home. Lyons hit a buzzer beater at the end of the game, but it was called off in a replay.

The Thunders made it to the playoffs in nine straight seasons starting in 2002-03, but have only reached the playoffs once in the past three years.

The situation isn’t looking up. The team has failed to rebuild after losing its strong players including Kim Seung-hyun, who retired before the season kicked off, and only signed one new free agent, Song Chang-moo, this year.

Samsung will face Anyang KGC on Tuesday for another chance to stop its away-game losing streak.