Determining the advantages of Choinomics

Determining the advantages of Choinomics 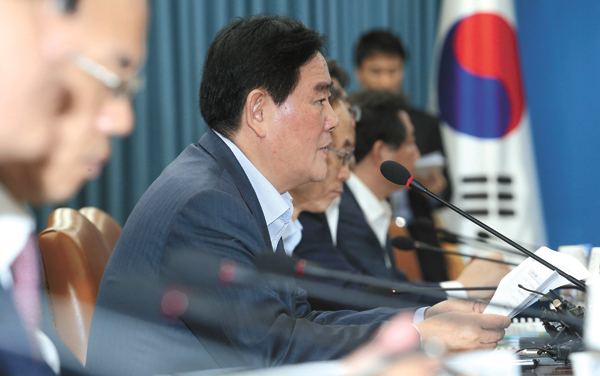 Finance Minister Choi Kyung-hwan on Monday announces the government’s economic policy direction for next year, calling for structural reforms in the labor market, financial sector and education, at a joint press conference with other ministers held at the Central Government Complex in Gwanghwamun, central Seoul. [NEWSIS]

“I will take a route that doesn’t exist on the map,” was among the remarks made by Choi Kyung-hwan, deputy prime minister for the economy and finance minister, that impressed market observers when he took office on July 16. “Aggressive” is another mantra that Choi has used almost every day since his inauguration.

Using his firm belief that “the economy is all about sentiment,” the Korean financial chief has done his best over the past six months to stimulate the market and get the anemic economy back on track. And his efforts are being felt in the market. With Choi leading the government’s economic policies, Korea’s main bourse hit a new high for the year, reflecting the high expectations that his leadership will bring positive results. With the finance minister’s direction, the second economic team of the Park Geun-hye administration came up with aggressive economic measures, including fiscal stimulus worth 41 trillion won ($37 billion).

But it is hard to see any tangible outcomes of the measures or positive progress of economic recovery yet. Major economic indicators blatantly tell that the economy is still mired in severe stagnation. The country’s gross domestic product (GDP) grew less than 1 percent for the past four quarters. The inflation rate rose less than 2 percent in the past 25 months, raising worries about deflation.

Economic analysts have given Choi high scores for his willingness to boost the economy. Soon after his inauguration, the minister announced expansionary fiscal policies, eased real estate measures and created plans to help raise household income and boost the service industry. The plans were aimed at breaking the vicious cycle of low inflation and low growth by releasing money into the market, encouraging consumption and reviving the real estate market.

“After Choi’s inauguration, the authority’s policy-making momentum has been stronger,” said Ohn Ki-un, an economics professor at Soongsil University. “The government’s willingness shows that it has accurately read the market. It is clearly aware that the current economic situation is dragging on, and has shown strong determination to stimulate the market.”

The current economic team has been the most successful at improving market sentiment about a recovery, analysts say.

At an investor relations meeting in New York in October, Choi made a presentation on his stimulus package in front of about 200 American investors. The minister’s assertiveness was received positively in the United States.

“I wish the U.S. could borrow Mr. Choi and do the same for the U.S. economy,” said one of the investment bankers who attended the talk. “It seemed to me he knows what he is doing, and I think he is on the right track.” 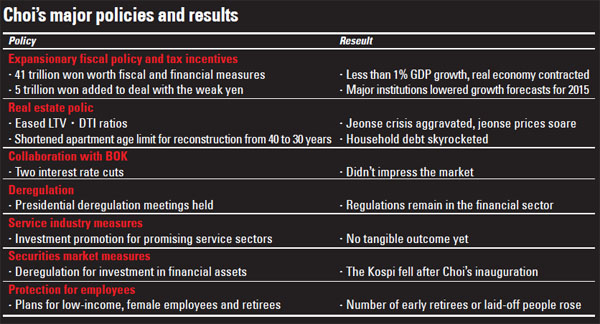 For the first three months, Choi’s team impressed the market by quickly laying out its plans.

On July 24, just eight days after his inauguration, the Ministry of Strategy and Finance announced a 41 trillion won package of fiscal measures.

It was dubbed Choinomics, comparing the stimulus package to Japan’s Abenomics, because Choi emphasized that failure to overcome the current economic problems might send Korea on a path similar to Japan’s lost two decades.

In order to liven up the real estate market, Choi played another surprising card: loosening the debt-to-income (DTI) and loan-to-value (LTV) regulations. Before taking up his post, Choi had criticized the former economic team’s real estate policy, saying: “The property market is like wearing short pants in a cold winter.” The LTV was raised to 70 percent for all financial institutions, while the DTI was fixed at 60 percent regardless of region, age or income.

The following month, the ministry came up with a plan to boost the services industry. Concluding that manufacturing alone can’t pull the economy out of its low growth, the government decided to relax a range of regulations in the services sector. It came up with 135 measures to improve demand in seven major service industries: medicine, education, tourism, content, finance, logistics and software.

But the move that got the most attention from the market was the Bank of Korea’s first cut in the benchmark interest rate on Aug. 14, from 2.5 percent to 2.25 percent. Long before the BOK’s decision, Choi had publicly said on several occasions that he would collaborate with the central bank to boost the economy. Despite some subtle tension, the minister and central bank governor said they share a common view of the economy’s current state. But the market knew that Choi had played a major role in convincing the central bank to lower the key rate. Some in the market called it “Choi’s cut.” The BOK then made another cut to 2 percent in October.

Another key part of Choinomics was to increase household income. To do that, the economics team created a tax code revision plan with two primary goals: making excess corporate cash reserves flow into households and reducing the tax burden on the middle class. Part of the plan was to offer 10 percent and 5 percent tax breaks for small businesses and conglomerates that raise the average annual salary of their workers above its median for the past three years.

For the real estate market, Choi announced on Sept. 1 that the time period for reconstructing apartments would be lowered from 40 years to 30 years to revitalize the frozen property market, which quickly led to a slight increase in housing transactions.

Although the plans unveiled by Choi’s team have brought positive reactions from experts and the market, there has been disappointment over the results of the policies, as most macroeconomic indicators still show poor growth performances.

A report by the BOK on Wednesday showed that consumer sentiment was worse in December, with the index falling to 102, down one point from November. The index was at 109 in January, but has hovered around 100 since the Sewol ferry sinking in April.

The ambitious taxation of internal corporate cash was considered when it was announced, but it is now being pointed to as one reason for reduced business investments.

It turns out that Choinomics has also not been successful at encouraging ordinary consumers to open their wallets, while those of corporations are now tightly closed.

Even though the government notified the business community that the tax will be imposed from 2017, local companies didn’t move to make more investment this year.

The government emphasized that its plan was not a tax but an incentive, because if companies meet the guidelines, they will receive tax deductions. But that still didn’t win over corporations.

Because of concerns about the plan, companies have scaled back their investments. A survey by CEO Score, a private business information website, showed that 254 local businesses made investments worth a total of 91.8 trillion won in facility investment and R&D in the third quarter, down 5.8 percent from the same period last year. The total facility investment of the surveyed businesses plunged 9.9 percent from a year earlier.

Another policy that has been questioned is the LTV and DTI easing, which did not increase housing transactions as much as the government had expected, and instead led to higher rents and higher overall household debt.

“The government lowered the barriers for loans, but people didn’t use them to buy houses and instead looked for other spending, which means the policy wasn’t effective,” said Kim Kyung-soo, an economics professor at Sungkyunkwan University. “If they let it go, it is only a matter of time until the household debt bomb will explode.”

“Mortgage issuances skyrocketed after the LTV and DTI ratios were eased, but most of them are being spent as general living costs,” said an official at a commercial bank. “Because the interest rate has gone down, demand for mortgages surged.”

“Choi’s measures would have been more effective if they were implemented at a time when the economy had hit rock bottom,” said Song Doo-han, the director at Nonghyup Economic Research Institute. “Because the economy has been in an indefinite situation [recovering somewhat slowly while deflation worries are rising], the measures didn’t have the effect of improving domestic demand.”