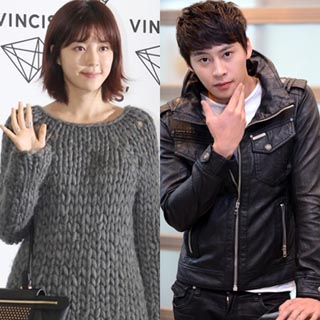 The romantic relationship went public on Christmas Eve when a local online news agency published photos of the two on a date in downtown Seoul.

The couple were captured walking down the street and eating ice cream cones together.

In response to the article, Park’s agency confirmed on Wednesday that the two are an item.

“They first got to know each other as the two appeared in the same TV drama series ‘One Well-Raised Daughter’ and began dating about a month ago,” the agency said in a press release.

Park and Jung played a fictional couple in the daily drama series, which came to an end in May.

“She broke up with Se7ven earlier this year, and they didn’t want their breakup to be published because Se7ven was serving in the military back then,” the agency continued.

Park and Se7ven were in a relationship for 12 years after getting together as high school students, but news agencies reported that the two broke up after the singer was caught visiting an adult massage parlor while serving his military duty in Chuncheon, Gangwon, about a year ago.

He was serving in the military as a celebrity soldier whose main duties are to promote the military.