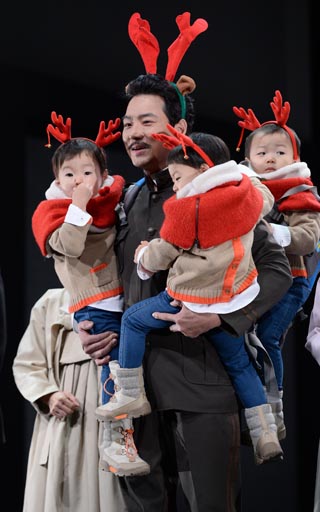 A desk calendar featuring images of Song Il-guk’s popular triplets is flying off the shelves.

The 2015 calendar, which includes pictures of Dae-han, Min-guk and Man-se - whose names spell out “Cheers to the Republic of Korea” - sold 125,000 copies as of Dec. 25, according to online marketplace Auction.

Song originally wanted to make the calendars to give as gifts to his acquaintances. But when viewers saw an episode in which Song and the three boys were shown at a photo shoot for the calendar, KBS received multiple requests to purchase it.

Each desk calendar is priced at 5,500 won and will be sold on Auction and Lotte iMall until the end of this month. All proceeds go to charity.

Auction and Lotte iMall will begin delivering the calendars on Jan. 5.

Song and his triplets are currently appearing in the popular KBS reality TV show “Return of Superman,” in which celebrity fathers take care of their children for 48 hours without their wives.

Song, who has taken many masculine roles in TV dramas, shows a more domestic and caring side to himself in the TV show.

Several popular celebrities and TV shows publish calendars at the end of each year. One is MBC’s popular reality TV show “Infinite Challenge,” which began publishing calendars for the show’s ardent fans in 2008.