KB turning over a new leaf with acquisition of LIG Insurance

KB turning over a new leaf with acquisition of LIG Insurance 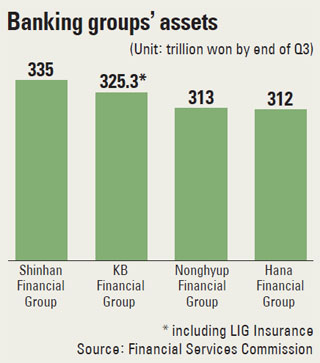 After a long wait, the financial authority has finally approved the acquisition of LIG Insurance by KB Financial Group.

The announcement was made on Wednesday, four months after KB Financial Group requested the approval of the acquisition.

KB Financial Group won the bid to buy 19.47 percent of LIG Insurance in June for 685 billion won, making it the largest stakeholder.

The green light for KB Financial Group is about more than expanding its non-banking businesses, which the financier has needed.

It also marks the beginning of KB Financial Group under its new chairman, Yoon Jong-kyoo, and a new start for the company as it tries to fix its reputation, which has been tarnished by in-house feuds and leaks of clients’ information.

By assets, KB Financial Group, which competed fiercely with Woori for the top spot until recent years, has now fallen to fourth place and is outranked by Shinhan, Nonghyuup and Hana financial groups. As of the end of the third quarter, KB Financial Group’s assets stood at 301.7 trillion won. But with LIG Insurance added in, the financial group will move up two notches to bring it close to Shinhan.

With LIG Insurance merged into the financial group, KB will have to rely less on its banking business. Currently, its earnings made from the flagship KB Kookmin Bank account for 86.7 percent of the total. That figure is expected to drop to 80.4 percent.

The heavy reliance on banking is considered one of the biggest problems at KB, and experts have said the group should diversify its portfolio.

With LIG Insurance, KB Financial Group will once again become a major player, with more than 285,000 employees and 12 affiliates.

This year has not been good for the financial group. In the second half of 2013, KB was already under scrutiny for bribery and falsified loan documents, which led to Chairman Euh Yoon-dae’s resign.

The financial group was hoping to turn the situation around, but a week after New Year’s, it was at the center of a new scandal as one of the three credit card companies whose clients’ personal information was leaked.