LeBron heading back to face the Heat in Miami

LeBron heading back to face the Heat in Miami 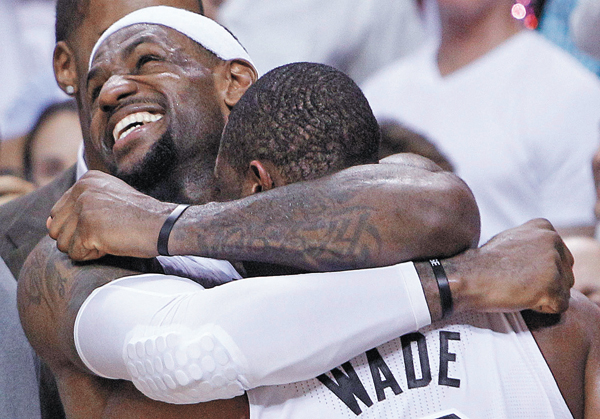 Miami Heat forward LeBron James, left, and shooting guard Dwyane Wade embrace during the NBA finals in Miami in 2012. James is set to return to face the Heat on Thursday. [AP/NEWSIS]

LeBron James doesn’t have any apprehension for this homecoming.

There’s nothing to fear, no real worries about his safety, unlike what awaited him the last time he had one of these return games. Then again, this might not even classify as a homecoming - because, it turns out, Miami was never truly his home, just a place he called home for four years while playing with the Heat.

On Thursday, James returns to face the Heat, the team that turned him from a superstar to a two-time NBA champion superstar. And as he and the Cleveland Cavaliers prepare for what will certainly be an emotional Christmas visit, James expects to be flooded with positive vibes.

“To say I haven’t thought about going back, I would be lying,’’ James said in Cleveland on Tuesday night after he and the Cavaliers beat Minnesota. “It’s going to be great to be back in that building around those unbelievable fans and the memories will definitely come back, being a part of the organization for four years.’’

For their part, the Heat insist that they’re looking forward to the reunion.

It goes without saying that some in the organization were angry when James left this past summer, in large part because of how long it took him to tell Miami that he would not be returning. But the building has hardly been scrubbed of reminders: Heat Coach Erik Spoelstra still has photos of James in his office.

James remains in contact with some Heat players, and his close friendship with Dwyane Wade continues.

“He made the right decision. He went home,’’ Wade said Wednesday. “You can’t say nothing about that decision when someone decides to go home.’’

The homecoming drama was so different four years ago.

When James returned to Cleveland on Dec. 2, 2010, for the first time after signing as a free agent with Miami, the city that adopted the Akron native as one of its own turned on him. He was booed incessantly by Cavs fans who felt that he had betrayed them despite seven great seasons.

The Heat won that night. And they knew they would never face an atmosphere that daunting again.

James has spent the past few days downplaying his return to South Florida, but the four-time MVP has found himself reminiscing about what he accomplished alongside Wade, Udonis Haslem, Chris Bosh, Mario Chalmers and those former Heat teammates who remain in Miami.

They became a family, and for James, family is everything.

“I’m one person who understands being home, being able to stay home and making sacrifices to be home,’’ said Haslem, a Miami native who has spent his entire NBA career there despite the chance to make more elsewhere. “I’ve done it my whole career and I can’t fault him for that. We had a great four years together, we had a lot of success together and we’ll continue to be friends.’’

Haslem still refers to his former teammate as the best player in the world and downplays the Heat vs. LeBron notion. The teams have other issues - Miami is 13-16 and missing an injured Bosh, and Cleveland lost forward Anderson Varajao for the rest of the season when he went down with an Achilles’ injury Tuesday night.

Some will boo. Some will cheer. Some may do both.

The Heat will honor James with an in-game video tribute, as they do with many returning players, and will have another for former Miami guard James Jones.