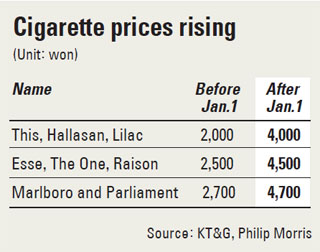 Korea’s largest tobacco company KT&G said on Thursday that the prices of all its products will increase by 2,000 won ($1.80) starting Jan. 1, in compliance with the government’s decision to raise taxes on tobacco.

KT&G initially considered adding an extra 200 won to 500 won on top of the required tax increase in an attempt to offset the predicted decline in sales, but said it has decided to stick with the minimum required amount.

The government has estimated that the 2,000 won rise will cause a 34 percent decrease in annual sales of cigarettes, with tobacco companies taking 940 billion won in sales losses.

Starting next year, popular cigarette brands produced by the company such as Esse, The One and Raison will cost 4,500 won, up from 2,500 won now. Lower-tier cigarettes including This, Hallasan and Lilac will sell for 4,000 won, a 2,000 won rise.

“We expect decreases in sales volume and revenues due to the price increase, but we placed only the minimum increase because of concerns for any negative effects that the price increase will have on households with lower incomes,” KT&G said in a statement.

However, the Imperial Tobacco Group decided to raise the price of Davidoff cigarettes by 2,200 won. The British multinational tobacco company that owns the brand has the right to decide the price of its cigarettes.

Philip Morris, another major cigarette manufacturer that holds the second-largest market share in Korea after KT&G, will also raise its prices by 2,000 won.

Philip Morris’ Marlboro and Parliament cigarettes will cost 4,700 won, up from 2,700 won. Other foreign makers including British American Tobacco and Japan Tobacco International have yet to announce their finalized prices.

The 2,000 won increase is broken down into a tobacco consumption tax, local education tax, health payments and value-added taxes.

The government defended its decision to raise taxes in the wake of a backlash from the public, saying that the measure is meant to discourage tobacco use.

The percentage of Korean men who smoke was 44 percent in 2013, among the highest in the Organization for Economic Cooperation and Development (OECD), and the nation also has among the lowest cigarette prices in the OECD.

But opposition politicians and critics have accused the government of attempting to plug holes in its tax revenues by squeezing ordinary citizens while maintaining tax cuts for the wealthy.

Faced with the drastic price increase, some smokers have hoarded cigarette packs ahead of the tax implementation.

Some convenient stores in the popular district limit the number of cigarette packs per person.

A worker at a CU convenience store near Lotte Department Store in Myeong-dong, central Seoul, said that the store has set a limit of no more than three packs per person.

“A customer is not allowed to buy more than three tobacco items,” said a clerk at the store on Thursday.

“Ever since the announcement was made, we’ve seen drastic increases in sales,” the clerk added. “But the government only regulates retailers if we store too many cigarettes. So, we needed to impose our own rules by placing the cap on the number of cigarettes one can buy.”

The employee said that most other stores are also limiting purchases of packs.

In September, cigarette sales at the nation’s three biggest convenience store chains increased by more than 30 percent after a series of news reports on the coming tobacco price increases aired on TV.

In response to the increasing incidents of hoarding, the Ministry of Strategy and Finance said in September that it will fine retailers up to 50 million won if they buy cigarettes in bulk.

Online retailer G-Market said that as of Dec. 22, sales of electronic cigarettes had surged 70 percent compared to the same period last year.

Since the new tax was announced in September, sales of e-cigarettes have constantly risen.

“Entering the new year, people are buying more electronic cigarettes,” said a representative of G-Market. “Still, this year’s sales are really remarkable. The drastic increase in sales is caused by the government’s price increase on tobacco.”