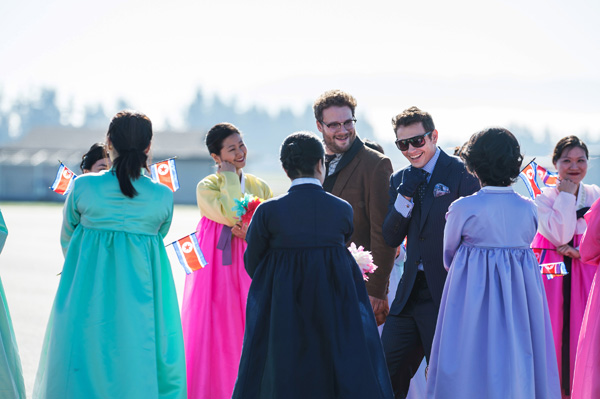 Seth Rogen, center, as Aaron, and James Franco, as Dave, arriving in North Korea to a welcoming crowd in a scene from the movie “The Interview.” Sony Pictures broadly released “The Interview’’ online Wednesday - an unprecedented counterstroke against the hackers who spoiled the Christmas opening of the comedy depicting the assassination of North Korean leader Kim Jong-un.[AP/NEWSIS]

LOS ANGELES - Amid a swell of controversy, backlash, confusion and threats, Sony Pictures broadly released “The Interview’’ online Wednesday - an unprecedented counterstroke against the hackers who spoiled the Christmas opening of the comedy depicting the assassination of North Korean leader Kim Jong-un.

“It has always been Sony’s intention to have a national platform on which to release this film,’’ Sony Pictures chair and CEO Michael Lynton said in a statement. “We chose the path of digital distribution first so as to reach as many people as possible on opening day, and we continue to seek other partners and platforms to further expand the release.’’

“The Interview’’ became available on a variety of digital platforms Wednesday afternoon, including Google Play, YouTube Movies, Microsoft’s Xbox Video and a separate Sony website, a day after Sony and independent theaters agreed to release it in over 300 venues on Christmas. The wide digital release is the culmination of a set of deals that have been in the works since the major theater chains last week dropped the movie that was to have opened on as many as 3,000 screens.

Kim Song, a North Korean diplomat to the United Nations, condemned the release, calling the movie an “unpardonable mockery of our sovereignty and dignity of our supreme leader.’’ But Kim said North Korea will likely limit its response to condemnation, with no “physical reaction.’’

Seth Rogen, who stars in the film he co-directed with Evan Goldberg, cheered the decision. “I need to say that a comedy is best viewed in a theater full of people, so if you can, I’d watch it like that. Or call some friends over,’’ he tweeted.

It was unclear whether the company will recoup the $40 million cost of the film and the millions more spent on marketing by deciding to release it online through affordable formats.

Sony has not ruled out the possibility of screenings of the film by major theater chains, though their symbiotic relationship has eroded in recent days.

Decisions by Google and Microsoft to show the movie could open their sites to hacking. Microsoft reported technical problems with its Xbox sign-in system Wednesday, though it wasn’t known whether it was the result of hacking. Microsoft declined to comment.

Sony’s initial decision not to release the film was widely criticized, with U.S. President Barack Obama one of the harshest critics.

Obama, asked whether he plans to watch the film, paused his golf game and smiled.

Obama was golfing with Malaysian Prime Minister Najib Razak at a military base in Hawaii, where the president and his family are vacationing.

Among the early viewers was 11-year-old Marco Squitieri of Washington, D.C. Squitieri had wanted to watch “The Interview’’ since seeing a preview earlier this year and had followed the news about Sony pulling the movie then permitting its release. Squitieri’s family purchased “The Interview’’ from Xbox for $14.99.

“It’s pretty funny,’’ Squitieri said, laughing as he praised the chemistry of Rogen and Franco and adding that he could understand why the North Korean government wouldn’t like it. “They make fun of North Korea a lot.’’

Amy Hurley, an executive assistant who lives in Detroit, paid $5.99 to rent the movie on YouTube Movies and was disappointed. A fan of Rogen and Franco, she found Franco’s character “way over the top’’ and thought the jokes “were old and kept going on and on.’’

“It was kind of a mess overall,’’ said Hurley, 42. “I was a little bummed because I was looking forward to seeing it.’’

The move to make the film available for rental and purchase before its theatrical release had never before been done with a mainstream film. Studios have released smaller indie and foreign movies simultaneously in theaters and on digital platforms, but analysts said the situation with “The Interview’’ left Sony little choice.

“This isn’t being done because Sony wants to do it regularly, but rather out of necessity prompted by the exhibitor boycott,’’ said Wedbush Securities analyst Michael Pachter.

“Sony is in a delicate situation here since they normally never go this route with a major film, but theater chains also know this is a unique back-against-the-wall situation,’’ added Gitesh Pandya, editor of BoxOfficeGuru.com.

While Pandya said that interest would likely wane in January, for now, the curiosity and enthusiasm is still palpable. Tyler Pulsifer, manager of the Hartford Spotlight Theaters in Hartford, Connecticut, said he had received 32 calls from people interested in seeing “The Interview’’ during the first 90 minutes the theater was open on Christmas Eve.

“I’d be willing to bet we’re going to sell out,’’ Pulsifer said. The theater has four showings on Christmas, and five each for Friday and Saturday nights.

“People want to see it because they’ve been told not to,’’ he said.

Josh Levin, general manager and co-founder of the West End Cinema in Washington, said demand for the film has been unprecedented.

“The phone has been ringing incessantly with people trying to buy tickets for this film,’’ Levin said. “I’ve had more than one of my very artsy regulars say they would not normally be caught dead watching a Seth Rogen, James Franco comedy but principle is so important they’re going to be here.’’

Darrell Foxworth, a special agent for the FBI in San Diego, said the agency is sharing information with independent movie theater owners showing “The Interview’’ out of “an abundance of caution’’ and to educate them about cyber threats and what help the FBI can offer.

“There’s nothing that’s specific or credible at this time,’’ Foxworth said. “We’re sharing information with theater owners and will assist them. We want to raise awareness that cyberattacks are increasing.’’

“While we couldn’t have predicted the road this movie traveled to get to this moment, I’m proud our fight was not for nothing and that cyber criminals were not able to silence us,’’ he said.