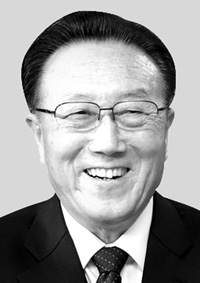 A top North Korean official said during a meeting with representatives from the Kim Dae-jung Peace Center that he hoped the two Koreas could resume the tour program on Mount Kumgang and hold reunions for separated families to chart a new path for an improved relationship.

The remarks by Kim Yang-gon, who is in charge of Seoul-Pyeongyang relations, were thought to be a reflection of North Korean leader Kim Jong-un’s presumed hopes for better inter-Korean relations.

“Secretary Kim said that [North Korea] is hoping in earnest to improve ties with the South, particularly since next year marks the 15th anniversary of the inter-Korean summit in 2000,” the former minister quoted Kim as saying upon his return to South Korea.

“Kim hoped that resuming the Kumgang tour program and holding reunions for separated families would serve as a small step to open a bigger window [for improved bilateral relations],” he said before reporters.

During talks, the Workers’ Party secretary also delivered a personal letter by North Korean leader Kim Jong-un for the former South Korean first lady thanking her for the flowers she sent to the ceremony commemorating the third anniversary of the death of Kim Jong-il.

In the letter, the younger ruler said he was “deeply thankful” for the commemorative flowers Lee sent and called them a sign of the dignified friendship formed with his father.

The young leader, who took the reins in North Korea following his father’s death in December 2011, also said he would strive to achieve unification by embracing the spirits of his father and former President Kim.

In addition, he invited Lee to Pyongyang next summer and wished her good health.

In stark contrast to its posture toward the Park Geun-hye and Lee Myung-bak administrations, Pyongyang highly respected the late President Kim for his efforts to mend ties through his progressive Sunshine Policy. The policy, which lasted for 10 years from 1998 under the Kim Dae-jung administration and the government of his successor Roh Moo-hyun, encouraged greater contact between the two Koreas.

The fact that Kim Jong-un sent one of his top officials to deliver a personal letter raised speculation that the North Korean leader could be more active in seeking talks with the Park administration next year, and that there could be a thaw in relations.

If Kim Yang-gon’s remarks truly convey the intentions of his superior, it is expected that North Korea will propose to restart the now-suspended tour program at Mount Kumgang as a first step toward improved ties.

It is also anticipated it will call on Seoul to lift the so-called May 24 sanctions, which South Korea imposed as a punitive measure after Pyongyang torpedoed the Cheonan Warship in March 2010. The incident killed 46 sailors.

The Mount Kumgang tour program has been suspended since 2008, when a South Korean tourist was fatally shot by a North Korean soldier - a tragedy that yielded no public apology from the North.

Inter-Korean relations showed slight signs of improvement after a surprise visit to Incheon in October by high-ranking officials from Pyongyang. At the time, the delegation proposed holding a second round of high-level talks in the coming days, which raised hopes for a breakthrough in bilateral ties.

However, the two sides have since failed to schedule a high-level meeting due to wrangling over a leaflet campaign by South Korean civic groups critical of the regime.