The costs are high for Olympic sporting facilities

The costs are high for Olympic sporting facilities 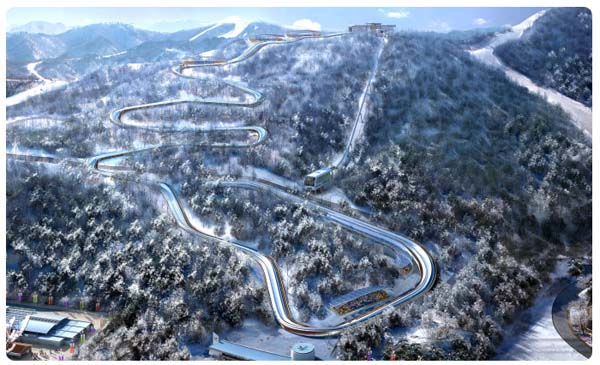 An artist’s rendition of the sliding center currently under construction for the 2018 Pyeongchang Winter Olympics.[JoongAng Ilbo]

Korea’s government authorities and the organizing committee for the 2018 Winter Olympics in Pyeongchang have opposed the suggestion made by the International Olympic Committee (IOC) on Dec. 8 to relocate some sporting events to foreign countries and have decided to stick to their original plans.

But that doesn’t necessarily mean the authorities are on the right track.

The budget for the Olympics has continued to grow over the past three years, while the authorities don’t appear to have yet found ways to repurpose the city’s newly built sporting facilities after the Games.

The sliding center for the bobsled, luge and skeleton events emerged as a primary concern following the IOC’s suggestion: The facility is expensive to maintain and is rarely used.

Currently, there are only 12 sliding venues in the world. The facility in Turin, Italy, which cost more than $100 million for the 2006 Winter Olympics was finally dismantled in 2012, while the Nagano Bobsleigh-Luge Park, used for 1998 Olympics, has essentially been out of commission since.

The sliding center for the Pyeongchang Olympic Games is to be built at the Alpensia Resort in Gangwon. Construction was initiated in March and is now nearly 13 percent complete. According to the organizing committee, it is set to be finished in October 2016.

In the initial report by the Korea Development Institute (KDI) in early 2012, the construction of the sliding center was expected to cost 80.9 billion won ($73.5 million), but the Gangwon Provincial Government later raised the amount to 115.6 billion in September 2012, reflecting additional factors such as inflation.

The total has continued to stay at 122.8 billion won, though it might increase further based on information in the KDI report, which mentioned that construction for the center was estimated to cost up to 142.5 billion won.

But despite the growing budget, ceding sliding events to foreign countries - Japan, in this case - is apparently not an option for organizers.

The organizing committee has maintained that the IOC’s suggestion is not considered financially beneficial, particularly given that 61 billion won would be needed for deconstruction and restoration - nearly half the center’s total budget - if building stopped now. Additionally, sliding sports typically account for about 10 percent of all sporting events in the Winter Olympics, and if Korea were to give up its sliding events to Japan, it would be obliged to relinquish some of its profits and sponsorship money provided by the IOC.

How Korea will deal with the sliding center after the Games is another issue that must be ironed out. According to the KDI’s calculation based on the Whistler Sliding Center in Vancouver, the center would cost more than 3.1 billion won annually to maintain. The Nagano Sliding Center eats up 2 billion won each year for maintenance alone, while it only brings in some 100 million won.

Right now, the Gangwon Provincial Government and the organizing committee plan to use it as a leisure facility, as well as an offseason training venue for foreign teams, and possibly a venue for relocated sporting events from future Winter Olympics.