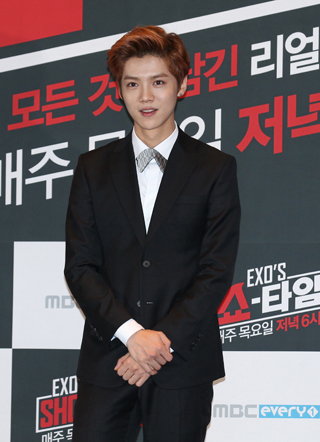 Luhan, a former member of Exo, has been cast in his first film role - the Chinese version of “Miss Granny.”

The film has attracted 8.6 million moviegoers since its release in January. It tells the story of a grandmother in her 70s who suddenly finds herself with the body of woman in her 20s. In the Chinese remake titled “Back to 20s,” Luhan will play the role of the main character’s grandson.

Jinyoung, a member of B1A4, played the role in the Korean version.

During a press event held Thursday in Beijing, director Leste Chen said he cast Luhan “for his popularity in China in the first place,” even though he is new to acting.

“But he tried hard to play the role by learning how to play the guitar and ride a bicycle,” the director continued. “I’m happy to have him in this film.”

Luhan first debuted in the Korean entertainment industry in 2011, but he suddenly filed a lawsuit against SM Entertainment to nullify the validity of his contract this year. Kris, another Chinese member of Exo, filed the same lawsuit earlier this year, too.

The Chinese remake version of “Miss Granny” will be released in Chinese theaters in August.