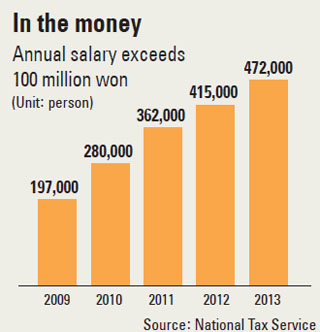 According to the National Tax Service’s annual report released Friday, a total of 16.3 million workers filed documents for year-end tax returns for 2013, and the high-income population earning salaries of 100 million won or higher accounted for 2.8 percent of the total.

The number of top salary earners has steadily increased in the past five years. In 2009, about 197,000 fell into the group.

“As overall levels of annual salaries have increased in the past few years, the growth rate of the high-salaried population that receives more than 100 million won has slowed down,” said an official from the National Tax Service.

Meanwhile, the number of women in the work force hit 3.87 million last year, slightly up from 3.56 million in 2012. The overall proportion of the female work force stood at 34.4 percent last year, only about 0.8 percentage points higher compared to 2012.