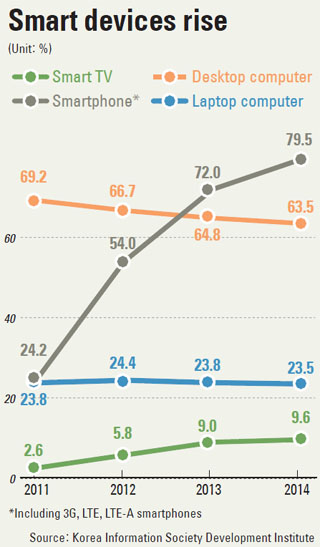 High-tech products such as smartphones and smart TVs are becoming common items in Korea, according to an ICT institute report showing that ownership of these multi-functional electronic devices has increased sharply over the last four years.

According to the Korea Information Society Development Institute (KISDI), nearly one in 10 Koreans has a smart TV - a digital television that connects to the Internet.

The report, which surveyed 12,000 people nationwide and was released this week, said that 76.3 percent of Koreans now own digital televisions and that 9.6 percent have smart TVs.

The figure has more than tripled compared to 2011, when only 2.6 percent of people said that their TVs were connected to the Internet.

According to Auction, a local online shopping mall, heavily discounted smart TVs from Samsung and LG were the best-selling products in a direct overseas purchasing event it held during Black Friday.

Ownership of 3-D televisions is also increasing. The report showed that 11.9 percent of Koreans have 3-D TVs in their homes, more than double the 5.2 percent recorded in 2011.

And nearly 80 percent of Koreans now own smartphones, the report said.

Among smartphone users, the KISDI said that 55.9 percent have devices that use a high-speed, long-term evolution (LTE) wireless communication service.

“We can see that the devices that people possess are generally getting ‘smarter’ as the ownership rate of smart TVs and smartphones has soared since 2011,” the report said.

“In particular, the smartphone is positioning itself as an essential item in people’s daily lives.”

The institute also highlighted that smartphone ownership is becoming more common among teenagers. The report showed that 92.9 percent of high school students now possess a smartphone, which is more than quadruple the 21.7 percent in 2011.

In addition, 84.6 percent of middle school students answered that they own a smartphone, which is a large hike from 12.8 percent in 2011.

And 60.1 percent of fourth, fifth and sixth grade elementary school students now also have their own smartphones.

As ownership of smart devices increases, the popularity of desktop computers has gradually declined over the last three years, the report showed.

The KISDI said that only 63.5 percent of those surveyed have desktop computers at home, which is 5.7 percentage points down from 2011.

The time spent using desktops PCs also declined sharply. In 2011, survey participants answered that they spent an average 1 hour, 16 minutes and six seconds on their desktops per day. But this shrunk to 59 minutes and 58 seconds this year.

In contrast, the time people spent on phones and TVs increased. On average, Koreans spent 1 hour, 31 minutes and 43 seconds on their phones while they whiled away 3 hours, 6 minutes and 30 seconds watching TV.

“The time spent using TVs decreased in the past but is now increasing again with supply of smart TVs and various video services,” the report said.

“On a similar note, the time spent on phones is increasing because of the wide usage and ownership of smartphones.”