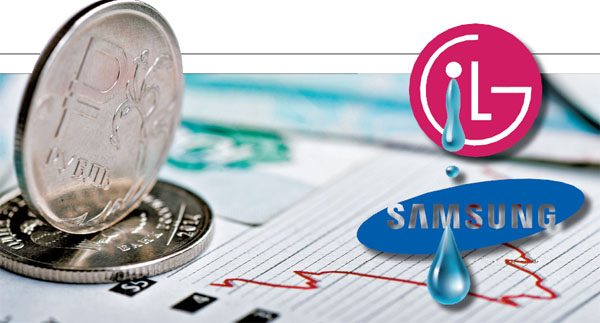 The free fall of the Russian ruble is giving Korea’s two electronic giants - Samsung Electronics and LG Electronics - a number of headaches.

Both say they will not halt their operations.

The value of the ruble plunged to 80 per dollar in mid-December from 32.9 rubles at the beginning of January. It has strengthened in the last few days to trade as strong as 52 per dollar on Thursday, with Russia claiming on the same day that the currency crisis had passed. But concerns are still rife.

The volatility of the Russian currency has been forcing many global companies to adjust their businesses. For instance, Apple halted its online sales before resuming iPhone sales with a 35 percent price increase this week. 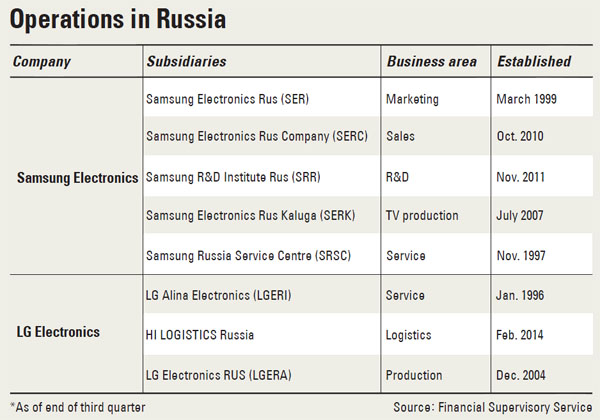 Unlike Apple, Samsung and LG have local subsidiaries and production bases in Russia, which makes the situation more complex because local jobs are at stake. While the two companies are emphasizing that their Russian affiliates are operated normally, they are still searching for a solution to obvious risks.

“Consumer sentiment has gotten worse and that will affect our sales in the short term,” said a spokesman from LG. “But this won’t lead to a business shutdown there. And we don’t have many loans in Russia.”

Last week, Samsung held a meeting for its global business operations in Suwon and Yongin, Gyeonggi, with some 500 executives from around the world. The Russian currency was reportedly one of the topics discussed at the meeting.

More discussions will follow at presidential-level meetings that will be held on Monday with top executives from Samsung Group’s de facto control tower, the Future Strategy Office.

“We are monitoring the plunge of the ruble closely, but there is no plan of suspending our sales there,” said an official from Samsung Electronics.

So far, Samsung has raised the price of its premium electronic items like the Galaxy Note and Galaxy Tab from 8 percent to 11 percent. The company is reportedly mulling additional price hikes.

The nose-dive of the ruble makes imported parts more expensive, while a hike in interest rates by the government is seriously weakening consumer sentiment. This means that businesses in Russia will see lower revenues.

Samsung has five subsidiaries in Russia, but business has not been going well. The Korean tech giant made 6.7 trillion won ($6 billion) in revenue in 2012, but that figure slipped 13.4 percent last year. Net profit was 21.8 billion won in 2012, but it also dived to 11.1 billion won in net losses.

The company has yet to reveal its Russian affiliates’ performances for this year, but sources said they are underperforming in their goals.

LG, which runs three Russian subsidiaries, is also having difficulties. According to the company, the revenue of LG Electronics Rus through this third quarter was 1.9 trillion won, down 7.2 percent from a year ago.

Despite difficulties, the two companies are saying that shutting their businesses would hurt their image in Russia and would eventually affect their business profoundly.

Industry insiders say the high brand value and creditability of Samsung and LG in Russia are based on their decisions to stay in the market when Russia declared a debt moratorium in 1998, which was triggered by the Asian financial crisis.

While Japanese companies pulled back from Russia, Samsung and LG both stayed. According to a recent survey by Online Market Intelligence, Samsung was named the No. 1 brand in Russia again for the fourth straight year, beating Adidas. LG was positioned at No. 9 for the third straight year.

Samsung produces about four million TVs in Russia yearly, which accounts for nearly 10 percent of the company’s total production.

“Russia is an important market not only for smartphones but also TVs and other home appliances,” said a spokesman from Samsung. “It is true that the market is difficult, but it’s not a market that we can easily decide to shut down or pull out of.”