Calendar sales go to good cause

Calendar sales go to good cause 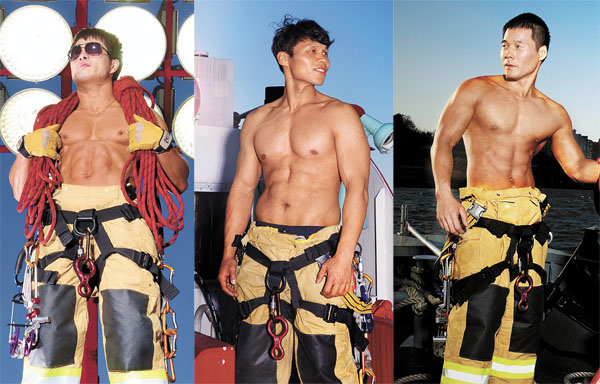 Firefighters doubled as models for a 2015 calendar, proceeds for which went to charity. From the left: Shin Jae-yeong of Seocho Fire Station; Hwang Beom-hee of Gwangjin Fire Station; and Lee Kang-soo of Gangdong Fire Station. Provided by the Seoul Metropolitan Fire and Disaster Headquarters

Thirteen firefighters will be featured as models in a 2015 pictorial calendar whose proceeds will go toward a good cause, the Seoul Metropolitan Fire and Disaster Headquarters announced Wednesday.

According to the organization, the firefighters were selected in a contest in May known as Seoul Momzzang, which translates to “diesel” in Korean. In the calendar, the first of its kind in the country, the 13 are photographed shirtless, showing off their toned physiques.

Proceeds from the sales will go toward the medical expenses of children who have suffered burn injuries.

“I hope the calendars increase public respect for firefighters and build up public trust in them in terms of safety,” an official from the Seoul Metropolitan Fire and Disaster Headquarters said. “We also hope that the young burn victims will grow up as strong as the firefighters in the calendar.”

Firefighter calendars are commonly produced in Western countries, and there is also high demand in China and Japan, which produce them annually.

“I had to work out three to four hours every day to present the image of strength that’s associated with a firefighter,” said Shin Jae-young, who appears in the calendar in April.

So far, public reaction has been hot. As soon as the calendars were published on Wednesday, the Seoul Metropolitan Fire and Disaster Headquarters received 300 calls for orders in just three hours.

The first thousand published calendars have already run out and additional production is scheduled.

The first 5 million won ($4,500) of the proceeds was sent to 4-year-old Shin Jae-bin, who received burns to 6 percent of his body in March while standing next to his sister, who was preparing a meal using cooking oil.

The family receives basic monthly living subsidies of 80,000 won and subsists off the earnings of the youngster’s father.

Those wishing to give should include their name, address and contact information. A minimum of 10,000 won is required for each calendar.